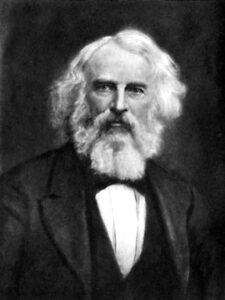 “A Biographical Sketch of one of America’s Greatest Men of Letters and Poets, Henry Wadsworth Longfellow,” by Andrew J. Schatkin

My dear fellow thinkers, I bid you and ask you to join with me in another voyage of intellectual discovery where those who may wish to engage in critical thinking and do not engage in and accept media lies, falsehoods, political code words, and hype can join in the effort to gain truth and facts amid the barrage of corruption and virtual darkness we are confronted with and befuddled and made effective fools of. I welcome you in this quest and task of attaining and coming to know intellectual honesty and honest discernment. Join with me in this voyage of discovery to get at and find what is valid and authentic in this world of confusion and come with me in tearing apart the curtain of lies and darkness that hides from us what is truth and facts.

Today I will write and speak of and on one of our greatest American poets and writers and men of letters, Henry Wadsworth Longfellow, and will speak of his life and literary works. In these pages I have spoken of with great pleasure some of my favorite English and American poets; prose writers; novelists; who I love and treasure. I have written of the life and works of such poets as TS Eliot; Shelley; Keats; and Byron; and such novelists as EM Forster; Kipling; Dickens; Trollope; Thackeray; Jane Austen; Conrad; Sinclair Lewis; Steinbeck and many others. None of these greats of world literature and world thinking are far from my thoughts and bedside and all are my daily companions and will never be far from me to the very end and conclusion of my life.

Longfellow was born in 1807 and died in 1882 and was an American poet and educator and he wrote several long poems including “The Song of Hiawatha” and “Evangeline.” He was born in Maine in Portland. He was descended from English Colonists who settled in New England in the early 1600s. At the age of six, he enrolled at the private Portland Academy. In 1822 he enrolled at Bowdoin College in Brunswick, Maine, where he later became a professor and later at Harvard. There he published a number of poems. In 1825 he was offered a job as a professor of modern languages at Bowdoin. He toured Europe beginning in 1826 and in 1829 turned down the professorship but later took the position. During his years of teaching he translated textbooks from the French; Italian; and Spanish and his first book was a translation of medieval Spanish poetry. He published a travel book in 1835 and married in 1831. In 1834 he was offered a professorship at Harvard. His wife died in 1835 at the age of 22. He returned to the professorship in 1836 and took up the professorship at Harvard. Longfellow began publishing his poetry in 1839. He began courting Frances Appleton for marriage and in 1843, after seven years of courtship, he received a letter from Fanny agreeing to marry him. The couple had six children. Longfellow published his epic poem “Evangeline” in 1847. Frances died in a fire in 1861 and Longfellow spent several years translating Dante’s Divine Comedy. The full volume translation was published in 1867. Longfellow supported the abolition of slavery. He died in 1882.

Much of Longfellow’s work consisted of lyric poetry. His poetry, however, shows great versatility. Much of his poetry stem from legends and mythology. For example, Finnish legends inspired the long poem “The Song of Hiawathain.” He was important as a translator. His first major poetry collections were in 1839, “Voices of the Night” and “Ballads and Other Poems.” In 1841, he retired from teaching to focus on writing. Longfellow was the most popular American poet of his day. Some of his most popular lyrics were “Paul Revere’s Ride,” “The Courtship of Miles Standish,” The ‘Village,” “Blacksmith,” and “The Wreck of the Hesperus.”

Ladies and Gentlemen, this great poet from my earliest days has been part of my personal library or at least he was in the house; I remember reading his three long poems with great pleasure including “Evangeline,” “The Song of Hiawatha,” and “The Courtship of Miles Standish,” and the short lyrics I mentioned here previously. He is one of my favorites and his musical verse haunts me to this day in its beauty and its music. Parents, go with you family to the bookstore and library and grab the volumes of his poetry.