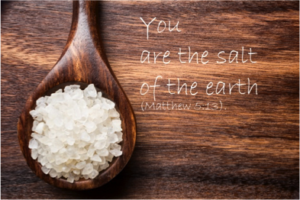 “Analysis of the Gospel of Matthew chapter 5 verses 13-20,” by Andrew J. Schatkin

Today I will attempt to interpret and explain and comprehend the gospel passage found in the gospel of Matthew chapter 5 verses 13-20. I do so with humility and great anticipation and hesitation knowing my human and mortal inadequacy as I set about the task before me to understand and present the meaning of the words of Jesus and I know how great an honor and privilege is before me. The following are the word of Jesus found in this passage of holy scripture: “You are the salt of the earth but if salt has lost its taste how shall its saltiness be restored? It is no longer good for anything except to be thrown out and trodden under foot by men. You are the light of the world. A city set on a hill cannot be hid. Nor do men light a lamp and put it under a bushel but on a stand and it gives light to all in the house. Let your light so shine before men that they may see your good works and give glory to your father who is in heaven. Think not that I have come to abolish the law and prophets. I have come not to abolish them but to fulfill them. For truly I say to you till heaven and earth pass away not an iota will pass from the law until all is accomplished. Whoever then relaxes one of the least of these commandments and teaches men so shall be called least in the kingdom of heaven but he who does them and teaches them shall be called great in the kingdom of heaven. For I tell you unless your righteousness exceeds that of the scribes and Pharisees you will never enter the kingdom of heaven.”

This passage involves many levels of understanding and interpretation and is a challenge to all of us to grasp understand and absorb. First, there is the use of the metaphors of salt and light. What I think Jesus is saying is that light represents righteousness and the person being one with god. The light imagery is applied to god and the righteous person and the Jewish nations whereas the fate of the salt as losing its flavor is an image perhaps of the divine judgment or perhaps the effect of sin and moral wrong on the formerly righteous and good person who has lost those qualities. Jesus does state that the righteous and loving and merciful person is a light to the world and we as Christians are to let our light or good works shine before men and so give glory to god. Jesus emphasizes in his use of the metaphors of salt and light that these metaphors represent the morally good person, and he commands us as members of the kingdom of god to let our goodness and good works shine before men.

The second and more difficult statement Jesus makes here is his command concerning the continued applicability of the Jewish law. He says that he has come to fulfill the law and prophets and not one iota of the law will pass away, and he tells us that whoever relaxes the least of these commandments and teaches men shall be called least in the kingdom of heaven but he who does them and teaches them shall be called great. Jesus in these words stresses the continuing validity of the law and its applicability and is somewhat opposed to St. Paul who in a sense ends the law in the new religious system he has founded, a new and modified Jewish religion. This passage could be interpreted as commanding not only the ethical commandments of the decalog and the commands to love god and love your neighbor but can be interpreted to include the continued application of the Jewish ceremonial and ritual law. How then is this passage to be interpreted? First, Jesus could be addressing the Jewish Christians following him. He is saying and approving their right to follow all the moral ethical ritual and ceremonial. A second approach to understanding this passage is that Jesus is telling his followers that at least the moral law is fully applicable and should continue and that his people followers and disciples are not to fall into the trap that they law can be abandoned and they can under this new and emerging religion do as they please. This passage can be seen as serious warning against relaxing the law to be replaced by the view that love and grace eliminate the commands of morality. I also don’t think the passage implies or states that non-Jewish Christians are compelled to follow the ritual and ceremonial Jewish law but certainly Jewish Christians under this passage are fully allowed to do so.

I hope and trust that I have shed some light on this passage or at least provided some mode and method of interpretation and my attempt in this essay to provide a vehicle to approach this gospel passage I see as a great honor privilege and I urge all my readers to read this essay and as always I urge you to return to the biblical text and never cease to read and read the words of the living god the redeemer and a savior of the world and the king and maker of creation.