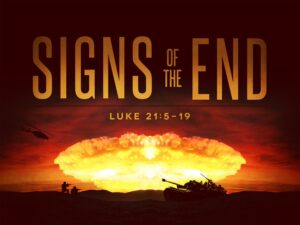 “Analysis of the Gospel of Luke chapter 19 verses 5-19 on the End Times,” by Andrew J. Schatkin

Today I will seek to interpret a gospel passage taken from the gospel of Luke chapter 21 vv 5-19 where Jesus speaks of the events of the end of the age. I do so and approach this matter and task with great hesitation and humility and do so with a sense or honor and privilege. I realize my inadequacy for this task in light of my mortality and limited humanity and rejoice that I am permitted to comment on the words and thoughts of the savior of the world and the redeemer of all humanity. The passage is as follows: And as some spoke of the temple how it was adorned with noble stones and offerings, he said “As for these things which you see the days will come when there shall not be left here one stone upon another that will not be thrown down.” And they asked him “Teacher when will this be and what will be the sign when this is about to take place?” And he said “Take heed that you are not led astray for many will come in my name saying I am he and the time is at hand. Do not go after them And when your hear of wars and rumors of wars and tumult, do not be terrified for this must first take place but the end will not be at once.” Then he said to them “Nations will rise against nation and kingdom against kingdom; there will be great earthquakes and in various places famines and pestilences; and there will be terrors and great signs from heaven. But before all this they will lay their hands on you and persecute you delivering you up to the synagogues and prisons and you will be brought before kings and governors for my name’s sake. This will be a time for you to bear testimony. Settle therefore in your minds not to meditate beforehand how to answer; for I will give you a mouth and wisdom which none of your adversaries will be able to withstand or contradict. You will be delivered up even by parents and brothers and kinsmen and friends and some of you will be put to death; you will be hated by all for my name’s sake. But not a hair of your head will perish by your endurance you will gain your lives.”

Dear Christians and non-Christians alike this is a most complex and telling passage which I now seek to interpret and grasp and fully comprehend given my human and mortal limitations I have mentioned before. Jesus speaks of a number of issues and matters here. He begins by speaking of the destruction of the temple and the destruction of Jerusalem and then the cosmic end times. Jesus informs the disciples of what the end times which will involve many portraying themselves as the returned son of man and even the returned Christ. Jesus warns the disciples not to be led astray by these false christs and false teachers. Jesus then speaks of the end times with cosmic events which will include wars and rumors of wars and nations rising against nations and kingdom against kingdom and Jesus says there will be great earthquakes and famines and plagues and terrors and signs from heaven. So we have here Jesus telling the disciples of the signs of the cosmic end of the age and the end of the world. Jesus goes on to tell the disciples that they will be persecuted and that they will be delivered to the synagogues or the Jewish hierarchy and officials and will be imprisoned and that they will be brought before kings and governors for his names sake and when they are brought before the officialdom, they will be delivered up even by parents, and brothers and family members and friends and some will be put to death. Jesus predicts they will be hated for his sake, but none will perish and by their endurance they will gain their lives.

There are a number of things to be understood as playing in the passage. First, Jesus speaks of and predicts the literally historical destruction of the temple and of the city of Jerusalem. That is the first and beginning point. Next Jesus sets forth the cosmic events of the end of the world. He also speaks of not to be fooled by false christs and not to be led astray by people saying they are the returned son of man and Christ when they are not. They even may say without authority that the end time is at hand. He then speaks of how Christians or believers and even Jewish people will be persecuted and how they will be brought before the authorities and they will be delivered up to and betrayed even by family and friends and some of them will be put to death and they will be hated by all for his name’s sake and that in the end they will gain their lives.

Finally, when they are betrayed and brought up before the authorities, Jesus tells the disciples to meditate beforehand how to answer because the son of god, Jesus, the redeemer, will give them a mouth and wisdom which none in this last time event will be able to withstand or contradict.

I do hope and trust my friends and colleagues that you have found some truth and wisdom in my interpretation and understanding of this passage and my comprehension of the words of Christ where he speaks of those falsely claiming to be him; speaks of the cosmic events and signs of the end of the world; and predicts future persecutions which we know was the case in the first 400 years after Jesus’s death and resurrection and is seen in the worldwide persecution of Christians and the church in today’s world. I urge you to read and reread this essay and to return to and read the biblical text in Luke which we cannot cease to read and meditate on. Jesus, who had met controversy and rejection in his life and ministry, predicts the same treatment for his disciples.