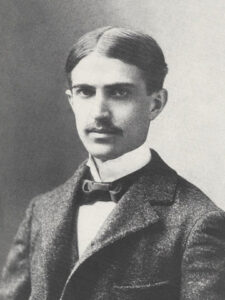 “Stephen Crane, One of our Greatest American Novelists and Poets and Short Story Writers,” by Andrew J. Schatkin

Ladies and Gentlemen, today I am setting about to speak of and analyze and perhaps comprehend and grasp the work life and literary works of one of our greatest American novelists and poets and writers of the short story, Stephen Crane. I have never ceased to love and treasure this writer all my life and continue to do so. He is never gone from my side and will be so to the end of my life along with the other great English and American writers such as the poets Keats, Byron, Shelley, Tennyson, \ Browning; and T.S. Eliot, and such writers of prose and the novel as Dickens, Thackeray; E.M. Forster, Conrad, Jane Austen, Scott, and many others. All these are my intellectual and personal indispensables.

I now speak of Stephen Crane, an American short story writer novelist and poet who wrote as a realist and naturalist. He left Syracuse University in 1891 to work as a reporter and writer and his first novel was entitled Maggie: A Girl of the Streets and he gained international success in 1895 for his Civil War novel The Red Badge of Courage. In 1896 he travelled to Cuba as a war correspondent. His vessel sank off the coast of Florida and he described his ordeal in the story called The Open Boat. He died in Germany at the age of 28.

He was born in 1871 in Newark, NJ. As a child, he was sickly and his father died at the age of sixty when Stephen was 8 years old. He wrote his first story when he was 14 and in 1885 enrolled in Pennnington Seminary, a coed boarding school focused on the ministry. After two years, he left this school and entered Claverack College, a quasi-military school. In 1888 he began working as an assistant to this brother in his news bureau. He transferred to Lafayette College to work in mining engineering and then transferred to Syracuse university and then left to pursue a career as a full time writer in New York. Crane struggled as a free-lance writer, contributing to various New York City newspapers. Maggie: A Girl of the Streets was published in 1893. He began writing the war novel, The Red Badge of Courage, and the novel was published in 1894. He travelled and his fame increased. At the age of 24 he became involved in a scandal with a prostitute. He then went on to be a war correspondent to Cuba to cover the Spanish-American War. There he met Cora Taylor and the two spent time together but the ship that sailed from Florida was sunk. He then managed to sell his story The Open Boat to Scribners for $300 and signed with the Hearst’s NY Journal to cover the Greco-Turkish War. He began covering the Spanish-American war as a journalism correspondent and reported on various battles and on the various military conditions. He died in Germany in 1900.

His fiction was in the form of realism and naturalism. These themes are particularly evident in his first three novels Maggie: A Girl of the Streets, George’s Mother, and The Red Badge of Courage. The Red Badge of Courage was innovative in style and psychologically and is often described as a war novel; it focuses less on battle than on the main character’s psyche and his reactions and response in war. Crane did write short stories such as The Open Boat and The Bride Comes to Yellow Sky. He wrote more than 100 short stories and sketches. He wrote six stories in a collection called the Little Regiment whose subject was the American civil war. The Open Boat and Other Stories contains 17 short stories that deal with Crane’s Asbury Park boyhood, his trip to the west and Mexico in 1895, and his Cuban adventure in 1897. This collection was well received as was his collection of stories The Monster and Other Stories. He did write poetry but this output has gained little critical notice and attention. In the end, the legacy of Crane was to be seen by critics and other writers as one of the most creative and innovative of writers of his time.

For me, The Red Badge of Courage, George’s Mother, and The Open Boat and A Girl of the Streets and The Bride Comes to Yellow Sky are most creative and innovative. Their realism and naturalism raise my sights and my consciousness. Their stark realism pulls me into the world that I do not know and I am so pleased I have come to know Crane’s realism.