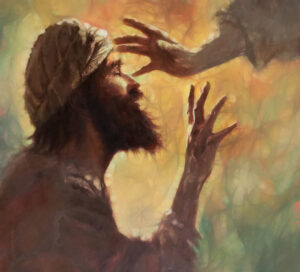 “Analysis of the Gospel of Mark chapter 10 vv. 46-52 the Story of Blind Bartimaeus,” by Andrew J. Schatkin

Today I will attempt and the word as always is attempt to interpret analyze and seek to comprehend and grasp if not fully understand the words and mind and thoughts of Jesus of Nazareth, the eternal god, savior, and redeemer and rescuer of all humanity and all mankind. I undertake this task with great humility, and hesitation, well knowing the reality and truth of my human limitations and mortality to even try to know the mind of Christ as he has shown us in his words in holy scripture and I am acutely aware of the honor and privilege in going about this task and I pray that I can and will come to know and understand and to some extent present the words of the holy savior whose depths none of us can fully plumb.

The passage from the gospel of Mark is found in chapter ten vv. 46-52, the Story of Blind Bartimaeus, is as follows: “And they came to Jericho and as he was leaving Jericho with his disciples and a great multitude, Bartimaeus, a blind beggar the son of Timaeus, was sitting by the roadside. And when he heard that it was Jesus of Nazareth he began to cry and say ‘Jesus, Son of David have mercy on me.’ And many rebuked him telling him to be silent: but he cried out all the more ‘Son of David, have mercy on me.’ And Jesus stopped and said ‘Call him.’ And they called the blind man saying to him, ‘Take heart rise he is calling you.’ And throwing off his mantle he sprang up and came to Jesus and Jesus said to him, ‘What do you want me to do for you?’ And the blind man said to him, ‘Master let me receive my sight.’ And Jesus said to him ‘Go your way; your faith has made you well.’ And immediately he received his sight and followed him on the way.”

This particular story of Jesus curing blindness and enabling a blind man to recover his sight is much more than one of many miracles related of Jesus in his three-year ministry. First of all, a blind beggar cries out to Jesus from the roadside. He obviously has little or no social status being nothing more than a beggar and we are not told whether he is Jewish or not, merely that he is a lowly beggar by the roadside. We are not told how he came to be in this condition nor if he at all deserves consideration or help from the lord. The beggar, an unknown quantity, cries out to Jesus to have mercy and many rebuke him telling him to be silent. One can see and grasp why many take this position and have this response. This man in the world is nothing even to Jesus. Jesus then in an act showing his universal love and the nature of his new church which knows no limits or boundaries of who may enter says, ‘call he blind man over’ and the blind man is called over and they say to him to ‘take heart he is calling you’ and the blind man throwing off his mantle sprang up and came to Jesus and Jesus in an act of his great love and compassion asks the blind man what he wants him to do for him and the blind man said to him ‘Master, let me receive my sight’ and Jesus said to him ‘go your way your faith has made you well’ and immediately the blind man received his sight.

This new church we come to know here has no ethnic limits. All humanity is welcome in its tents and most important faith. Jesus tells us here that love can be found in all, Jewish and non-Jewish alike, even in a blind beggar by the roadside. This narrative here is the beginning point of the new universal church beyond the boundaries of Palestinian Judaism and Jesus makes clear that faith may be found in all and is now not confined to the Jewish people and that faith can be found in any all we may encounter. Perhaps the same point is made by Jesus in the Parable of the Good Samaritan where the outcast Samaritan we are told is the one who is in that parable the true neighbor and again in that parable we are told of the foundation of the new church Jesus is establishing where all are included and none excluded where there is good works and faith as found in the Samaritan and faith as found in the Bartimaeus, the blind beggar.

Here Bartimaeus seeks out Jesus, is healed, and becomes a disciple. The use of the name and term Son of David is the first use of the messianic title to Jesus and is a recognition of Jesus’s true identity by a human being rather than a demon. The question ‘what do you wish me to do’ prompts a response from the beggar to show his faith in Jesus to restore his sight and finally Jesus makes clear that it was the man’s faith that brought about the restoration of his sight.

Dear Friends and comrades, I pray and hope I have offered to you a helpful and adequate attempt at interpreting this passage and urge you to read and even reread what I have attempted here and, more important, urge you to go back to the bible and he biblical text and read and reread the words and mind and thoughts of the son of god and so come to know the depth of what he says in this and other passages from the gospel I have sought to understand, interpret, and analyze.