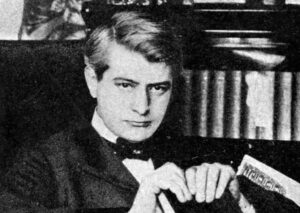 “A Biographical Sketch of one of our greatest Writers, Frank Norris,” by Andrew J. Schatkin

My dear friends, thinkers, readers and men and women of all thoughts ideas and opinions, I bid you and ask you to join with me in another voyage of intellectual discovery where those who may wish to engage in critical thinking and do not engage in and accept media lies, falsehoods, political code words, and hype can join in the effort to gain truth and facts amid the barrage of corruption and virtual darkness we are confronted with and befuddled and made effective fools of. I welcome you in this quest and task of attaining and coming to know intellectual honesty and honest discernment. Join with me in this voyage of discovery to get at and find what is valid and authentic in the world of confusion and to come with me in tearing apart the curtain of lies and darkness that hides from us what is truth and facts.

Today I will analyze and seek to understand a great American novelist Frank Norris. Prior to this I have spoken of and sought to present and report on the great English and American novelist and prose writers as well as poets such as Keats, Shelley, Byron, AE Housman; examples of English poets and and American writers as Dickens, Kipling, TS Eliot, and Thackeray, as well as Scott, Jane Austen and Conrad, all great novelists and thinkers. I treasure all these great writers and they will always be by my side and never leave me great as I well know they are. Today I will speak of Frank Norris a lesser-known American journalist and novelist during the Progressive era whose fiction was predominantly in the naturalist genre following in the footsteps of other writers in the naturalist and realist genre, such as Stephen Crane and Upton Sinclair. His notable works include McTeague: A Story of San Francisco, and The Octopus: A Story of California and The Pit. Norris was born in Chicago in 1872. In 1884 the family moved to San Francisco where his father went into real estate and in 1887, after the death of his brother and a brief stay in London, Norris went to the Academie Julian in Paris where he studied painting for two years and then he attended the University of California at Berkeley where he became acquainted with the writings of Darwin and Spencer.

After his parents’ divorce, he spent a year in the English Department at Harvard. He then worked for several newspapers and as a correspondent in Cuba in the Spanish-American War in 1898 and joined the New York city publishing firm of Doubleday in 1899. In 1900 he married and had a child who died in 1902. His writings depict suffering caused by greedy corporate monopolies. In his novel The Octopus, the Pacific and Southwest Railroad is implicated in the deaths and suffering of ranchers. Norris’s writings have been compared to the work of such realists and naturalists as Stephen Crane and Theodore Dreiser. Norris’s work has been accused, perhaps rightly so, of anti-Semitism and racism, and although some of his work has remained admired and has fared well in the hands of literary criticism, in the late 20th century and the 21st century, he has been brought to task for his racism and anti-Semitism which has contributed to his decline of his reputation during the past several generations.

This much I can say of Norris: His work represents the good and perhaps the best of American naturalism and realism of his time, whether found in Crane or Dreiser or others such as Upton Sinclair. His faults, such as they are, are the faults of his age and time and on can see them equally so in Jack London and Rudyard Kipling. The faults of these writers labelled and found to be racism or anti-Semitism do not take away from the essential literary worth of their output. The same could be said of the anti-Semitism of TS Eliot. Faults they are, but these writers must be judged on their literary work not on some sort of failings of their age, time, and generation.