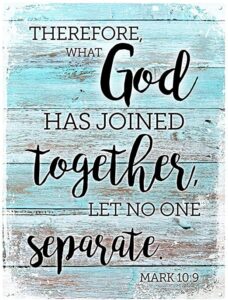 “Analysis of the Gospel of Mark chapter 10 vv 1-12, Jesus’s Teaching on Divorce,” by Andrew J. Schatkin

Today I will set about and make an attempt at interpreting understanding and comprehend Jesus’s teaching on divorce found in the gospel of Mark chapter 10 vv. 1-12. I do this with great humility and significant hesitation as a limited human being and mortal seeking to grasp the meaning of the words and teaching of the son of god and the savior and redeemer of the world and of all humanity. I hope and pray that I can shed some light on the deep and profound words of Jesus, the full meaning of which most of us cannot I think ever fully understand

The passage from Mark is as follows: “And Pharisees came up and in order to test him asked is it lawful for a man to divorce his wife. He answered them, ‘What did Moses command you?’ They said ‘Moses allowed a man to write a certificate of divorce and to put her away.’ But Jesus said to them ‘for your hardness of your heart he wrote you this commandment, But from the beginning of creation god made them male and female. For this reason, a man shall leave his father and mother and be joined to his wife and the two shall become one flesh so they are no longer two but one flesh. What therefore god has joined together let no man put asunder.’ And in the house the disciples asked him again about this matter. And he said to them ‘whoever divorces his wife and marries another commits adultery against her and if she divorces her husband and marries another, she commits adultery.’”

I see two distinct messages from Christ in this gospel passage. First, he is asked by the pharisees is it lawful for a man to divorce his wife and Jesus refers to Moses’s command and explains that it was given to man the right to write a certificate of divorce and put his wife away and this rule arose because of human hardness if not sin. Jesus goes on to explain the true answer and rule which supersedes the rule of Moses and explains that god made male and female from the beginning and for this reason a man shall leave his father and mother and be joined to his wife and the two shall become one flesh and that what god has joined together let not man put asunder and goes on to further state an even stricter rule and even more demanding on us all, that whoever divorces his wife commits adultery against her and if she divorces her husband and marries another she commits adultery. Jesus is making clear that marriage and family are so basic and important that there can be no divorce allowed under any circumstances and one who does so whether man or woman commits adultery. Jesus’s focus her e is on the preservation of the family and he recognizes correctly that marriage and family, if undertaken, are paramount. Jesus says that it is god’s eternal desire from creation that a man leave his mother and father and be joined to his wife and the two now are one flesh and they are joined by god and cannot be put asunder.

There is another point to be made here and it is that marriage between man and woman is the significant and only relationship with no allowance for any other forms and types of relationships, whether sexual relationships as between the unmarried or non-heterosexual relationships. Marriage between man and women for Jesus is the only option and was made to be and commanded by god from the beginning. So we have three ways to understand this passage: one, from the law of Moses where a man could simply put away his wife by writing a certificate of divorce was made in recognition of human fault if not sin. Second, that the preservation of the family is, if undertaken, is so important to god that divorce is not allowed and the person who does so commits adultery. And, third, Jesus makes clear here that the only option for us all is marriage with a man or woman neither more nor less.

This teaching on marriage is a radical teaching and reflects the view of Jesus that the married couple are one flesh and their relationship cannot be dissolved. The question put here is it lawful for a husband to divorce his wife concerns the legality of divorce and not the grounds. Moses’s command takes the institution of divorce for granted and concerns only the procedure. Jesus regards Moses’s teaching on divorce as a concession to human weakness and a deviation from the original plan for marriage found in Genesis. Jesus’s teaching is a restoration of god’s original plan for marriage superseding the teaching of Moses in Deut. 24. The view that marriage brings about one flesh between the joining of man and woman and supplies the reason why divorces is impossible. Finally, there is the end absolute teaching on the permanence of marriage were Jesus in even stricter terms states that to divorce and remarry is to commit adultery whether man or woman husband or wife.

I hope and trust and pray dear friends and colleagues and Christians and non-Christians alike and that I have shed some light, however slight, on this passage in Mark and as always take it as an honor and privileges to be given the chance and opportunity to comment on the words of Jesus as he speaks to us from holy scripture and from the mansions and precincts of heaven in the company of all the saints, angels, archangels and with the holy trinity. I urge you to return to the biblical text in Mark and read and reread the teaching of Jesus on divorce and remarriage and perhaps read again this essay should you determine it has some value.