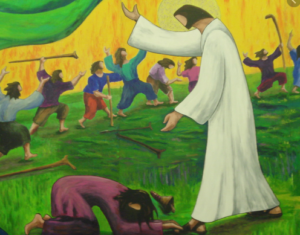 My dear friends and fellow thinkers and Christian and non-Christians alike and you of all paths and thoughts. I bid and ask you to join with me in another adventure of intellectual discovery where those who may wish to engage in critical thinking and do not engage in and accept media lies falsehoods and political code words and hype can and will join with me in the effort to gain truth and facts amid the barrage of corruption and virtual darkness we are confronted with and befuddled and made effective fools of. I welcome you in this quest and task of attaining and coming to know and grasp intellectual honesty and honest discernment. Join with me in this voyage of discovery to get at and find what is valid and authentic in this world of confusion and do come with me in tearing the curtain of darkness that hides from us what is truth and facts.

I now present to you my explanation and attempt at interpretation of Jesus healing of the ten lepers found in the gospel of Luke chapter 17:11-19 and I do so with humility and hesitation as I approach the words and thoughts of the eternal god and savior of mankind. The gospel passage is as follows: “On the way to Jerusalem he was passing along between Samaria and Galilee and as he entered a village he was met by ten lepers who stood at a distance and lifted up their voices saying, ‘Jesus, Master, have mercy on us.’ When he saw them he said to them ‘go and show yourselves to the priests and as they went they were cleansed.’ Then one of them when he saw that he was healed turned back praising god with a loud voice and he fell on his face at Jesus feet giving him thanks. Now he was a Samaritan. Then Jesus answered, ‘Were not ten cleansed? Where are the nine? Was no one found to return and give praise to god except this foreigner?’ And he said to him, ‘rise and go your way your faith has made you well.’

Again, we are challenged in this passage by Jesus’s words and the narrative of the events here themselves. First we have the miracles of the healing and cure of these lepers. They approach Jesus asking for mercy and they are in fact immediately cured. Jesus is heading for Jerusalem where he will have his final and most significant encounter with the will of god and gods plan for him as the messiah son of god and savior of mankind from their sins. Jesus encounters a Samaritan, a foreigner, and non-Jew cut off from the Jewish population of Palestine and essentially a foreigner. He tells the ten to show themselves to the priests, meaning having performed this miracles as evidence of his god hood divine nature and divinity he wants proof to the Jewish population and the Jewish leaders of the miracle and this demonstration of his innate divine power. What happens next is most important. One when he saw that he was healed returns and turns back and praises god with a loud voice and falls on his face at Jesus’s feet and gives thanks. He was a Samaritan and Jesus asks why in light of this great miraculous healing where are the nine when ten were cleansed and was no one was found to return to god and give praise and thanks except this foreigner; he says to the Samaritan, ‘go your way your faith has made you well.’ The Samaritan has found not only that he has been healed but that Jesus is the agent of his salvation. The Samaritan’s returns to Jesus amounts not only to his conversion in some sense but the event establishes god’s plan of salvation is now for people of the earth since not only is the Samaritan healed and the object of Jesus’s miraculous act, but he comes back recognizing Jesus as the new agent of salvation, but shows his gratitude in returning to the now known living god to and for him. Jesus notes that none of the others showed gratitude except the Samaritan foreigner and he says to him emphatically his faith has made him well. The others may have been cleansed and cured by a miracle but not at the level of the Samaritan who was the only one who showed gratitude, number one, and in addition was a Samaritan and foreigner, yet his faith is noted and spoken of. It is clear the gratitude of the Samaritan represents the extension of the gospel and salvation to all nations.

Dear Believers and non-believers, I hope you have derived some benefit from this exposition of the words of Christ and I have written this essay with hesitation knowing my inadequacy in seeking and even understanding the words of Christ which must always challenge my grasp of the meaning of Christ’s words wherever they may be found and come to be known by us all.