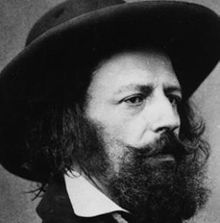 My dear friends and fellow thinkers and readers and lovers of great literature, I bid and ask you to join with me in another adventure of intellectual discovery where those who may wish to engage in critical thinking and to not engage in and accept media lies falsehoods and political code words and hype can join in the effort to gain truth and facts amid the barrage of corruption and virtual darkness we are confronted with and befuddled and made effective fools of. I welcome you in this quest and task of attaining and coming to know and grasp intellectual honesty and honest discernment. Join with me in this voyage of discovery to get at and find what is valid and authentic in this world of confusion and do come with me in tearing apart the curtain of darkness that hides from us what is truth and facts.

I am as you all may know a fan of the English literature of past times and ages. I have written and spoken of in these pages of such giants of English literature a Chaucer; Keats; Byron; Shelley; Dickens; Thackeray; Conrad; Austen; and many others, including one of my favorites E.M. Forster. I now propose a short biographical sketch of another great and outstanding English poet Alfred Lord Tennyson. Tennyson, a British poet, was born in 1809 and died in1892. He was the poet laureate during Queen Victoria’s reign and is still one of the most popular of British poets. In 1829, he was awarded the Chancellor’s gold medal at Cambridge for one of his first lyrics. He published his first solo collection of poems entitled Poems Chiefly Lyrical in 1830. Claribel and Mariana, which remain some of Tennyson’s most celebrated poems, were included in this volume. Tennyson excelled at short lyrics such as Break, Break, Break; The Charge of the Light Brigade; Tears, Idle Tears; Crossing the Bar; Ulysses; Idylls of the King Tithonus; and In Memoriam.

Tennyson was born in Somersby and his father was an Anglican clergyman. From 1816 to 1820, he was a student at King Edward VI Grammar School from 1816 to 1820 and entered Trinity College-Cambridge in 1827, and joined the secret society, the Cambridge Apostles. In 1831, Tennyson’s father died. He left Cambridge before taking his degree and returned to the rectory for another six years. In 1833, Tennyson published his second book of poetry which included the first version of the Lady of Shallott and In Memoriam. In1842, he published the two-volume poems which included Locksley Hall; a new version of The Lady of Shallot came out in 1847. In 1850, he published his masterpiece, In Memoriam. He dedicated it to Arthur Hallam. That same year he married and in 1850 was appointed to the position of poet laureate and declined a baronetcy in 1865. In 1868 he accepted a peerage and in 1883 and 1884 Queen Victoria created him a baron. In 1855, he produced one of his most famous poems, The Charge of the Light Brigade. While poet laurate, he produced two notable odes, Ode on the Death of the Duke of Wellington and Ode Sung at the Opening of the International Exhibition. He wrote Maud in 1855 and continued writing into his eighties and died in 1892 at age 83. The material for Tennyson’s poetry included medieval and classical material and his use of the musical qualities of words and of rhythms was outstanding. Tennyson polished and revised his manuscripts extensively. His poetic work often reflects melancholy and grief as seen in Mariana and the Lotos Eaters.

For me, Tennyson’s poetry is a long love affair with his mastery of rhythm and word sounds. Among his most loved poems for me are the short lyrics such as The Charge of the Light Brigade; Ulysses; the Lady of Shalott and Locksley Hall. I also very much admire and often read his wonderful long poems such as the Idylls of the King, a poetic rendition of the legend of King Arthur and In Memoriam. I also love and enjoy one of his greatest of poems, The Lady of Shallott. These poems are embedded in my memory and consciousness. He is one of the greatest of English poets.

Dear friends, parents, and young people, do not miss out on this great poet one of the lights and greats of English literature. He is a poetic treasure not to be missed and I ask you all do not let our current fads and fashions do away with the writers I have spoken of in these pages and do not let future generations be cheated in the name of and for the sake of cheap shallow politics.