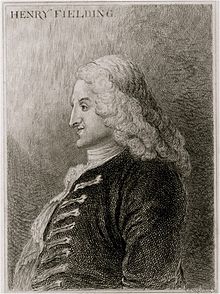 “A Short Biographical Sketch of One of Our Great English Writers, Henry Fielding,” by Andrew J. Schatkin

My dear friends and colleagues and fellow thinkers and readers, I bid and ask you to join with me in another adventure of intellectual discovery where those who wish to engage in critical thinking and do not engage in and accept media lies falsehoods and political code words and hype can join with me in the effort to gain truth and facts amid the barrage of corruption and virtual darkness we are confronted with and befuddled and made effective fools of. I welcome you in this quest and task of attaining and coming to know and grasp intellectual honesty and honest discernment. Join with me in this voyage of intellectual discovery to get at and find what is valid and authentic in this world of confusion and do come with me in tearing apart the curtain of lies and darkness that hides from us what is truth and facts.

As you may know, I am a great fan of English literature and in these pages have presented biographical sketches of the greatest of English writers and literature of the past. These writers have been my idols and they are the true movers and shakers of thought and history. This day, I will present a biographical sketch of another of the great English writers of all time, Henry Fielding. He is, along with Milton, Austen, and Conrad, one of my literary and intellectual indispensables.

Henry Fielding was born in Somerset, England and educated at Eton College. His mother died when he was 11 years of age. Henry was placed in his grandmother’s care and in 1725 tried to abduct his cousin Sarah while she was on her way to church. He fled to avoid prosecution and travelled to Leiden to study classics. He returned to London and began writing for the theater. Fielding left the theatre and became a barrister and was called to the bar in the middle temple. Fielding never stopped writing political satire, and from 1734 to 1739 wrote anonymously for the tory periodical, The Craftsman. Fielding took to novel writing in 1741. His first work was Shamela, followed by a wonderful novel Joseph Andrews. This work marks Fielding’s debut as a serious novelist and was a combination of the poetic and drama emphasizing the comic. This was followed by another novel, The Life and Death of Jonathan Wild the Great. The Female Husband, 1746, fictionalized a case in which a female transvestite was tried for duping another woman into marriage. His greatest work, however, is Tom Jones, which I have always admired and enjoyed. It is a comic novel telling the tale of how a foundling came into his fortune. The novel traces Tom’s alienation from his foster father, Squire Allworthy, and his sweetheart, Sophis Western, and his reconciliation with them after. The novel presents English life and character in the 18th century and every social type is presented and every shade of moral and immoral behavior. In 1734, Fielding was appointed as chief magistrate in London. Fielding continued to publish in the 1750s. In 1754, he died in Lisbon due to continuing and deteriorating ill health.

I have presented this sketch of Henry Fielding as a virtual founder of the English novel, along with Daniel Defoe and Tobias Smollett. These writers, along with Fielding, are the literary innovators and founders of the English novel with its later flowering in the 18th century in the persons of Charles Dickens, Anthony Trollope, William Thackeray, and Mrs. Gaskell. Fielding. in terms of his highly original novels. has to be counted one of the original and great novelists of all time. I have never stopped reading and enjoying Joseph Andrews and Tom Jones and I urge you, my dear readers, and most of all parents, take your children to the library. Take them to your local Barnes and Noble and show them and introduce them to the writers I have spoken of in these pages. Don’t let your children be cheated for the sake of fads, modernity, and politics.

Note: I am indebted to Wikipedia for much of the information on this blog.