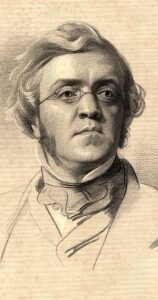 “A Short Biographical Sketch of One of Our Great English Novelists and Writers, Willliam Makepeace Thackeray,” by Andrew J. Schatkin

My dear friends thinkers a and lovers of English literature, I bid and ask you to joint with me in another adventure of intellectual discovery where those who may wish to engage in critical thinking and do not engage in and accept media lies, falsehoods and political code words and hype and join me in the effort to gain truth and facts amid the barrage of corruption and virtual darkness we are confronted with and befuddled with and made effective fools of. I welcome you in this quest and task of attaining and coming to know and grasp intellectual honesty and honest discernment. Join with me in this voyage of discovery…

Today I will speak of the life and work of William Makepeace Thackeray, one of the giants and the all-time great of English literature along with his contemporary, Charles Dickens. Thackeray was born in British India where his father was secretary to the board of revenue in the British East India company. His mother was also a secretary and writer for the East India Company. His father died in 1816 and Thackeray was sent to England. Thackeray was educated at the Charterhouse school. Thackeray briefly attended Cambridge university and travelled on the continent for some time. He began to study law in the Middle Temple but soon gave it up. At the age of 21, he came into his inheritance but soon lost his fortune in the collapse of two Indian banks. In 1836, he married and had three children. He then set about to work for and contribute for several journals and magazines, including Fraser’s; the Morning Chronicle; The Foreign Quarterly Review; and Punch. Thackeray achieved recognition with The Book of Snobs, but what really established his fame was what many regard as his greatest work of fiction, Vanity Fair, which was published in installments in 1847. Before the book completed its serial run, Thackeray became a celebrity sought after by lords and ladies and was hailed as the equal of Charles Dickens. Thackeray remained at the top and produced several large novels including Pendennis; The Newcomes; The History of Henry Esmond; and the Four Georges. In 1857, he stood for parliament as a Liberal for the city of Oxford. In 1860, he became the editor of the Cornhill magazine. In 1863, he suffered a stroke and died and 7,000 people attended his funeral.

Vanity Fair is his best known and most enduring work. The book describes striving for power and profit of the new middle class. The new middle class sought to emulate the lifestyle of the aristocracy by increasing their material possessions. His other novels have somewhat faded somewhat from the critical and public view, although The Newcomes, which portrays the marriage market, is a notable novel of the 18th century.

Dickens and Thackeray represent the flowering of the installment novel which entertained the newly more literate rising middle class. I have to say that along with the other giants of English literature, I return to both Dickens and Thackeray with great love and reread these writers and in particular do return to Vanity Fair and Henry Esmond. Each time I dip into them and have the chance time and opportunity to come back to them always with increased pleasure and entertainment. For the modern world, Thackeray’s writing demands much from the readers of our present society and people may not have the attention spans required to enjoy his work. Perhaps the reading public of past times, whether the 19th century or the 18th century, was better educated and more of an elite than is true of our age of universal education whose attention span has been severely affected by the influence and dominance of social media with its constant assault on the minds of all of us with the effect we think and reflect less and less and learned from and by a culture of images and the quick fix.

My friends, and most important parents, do not fail to direct your children to these great works of the past whose value has been vetted by time and for your children to bypass and not know of these seminal works is to cheat them of what they should know and benefit from and displace the western canon with works assigned by shallow politics. Do not, my dear friends, families and children, be blinded and kept in darkness from the truly great works of literature that if missed will bring your children more and more to ignorance which is presently is in the grip of our world.

Note: I owe to Wikipedia much of the facts and information found in this essay.