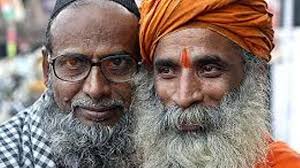 My fellow readers, thinkers, and discerners who wish to engage in critical thinking and reject political correctness and media lies and falsehoods, I ask you to once again join with me in another intellectual adventure where together we may find truth and facts and do away with the forces of commercial and political darkness and together attain what is real and suggest what may be the answer to the present problems and events that haunt us and fool and manipulate us. I bid you follow me to some form of honest truth and so serve the next generation and bring them to the light and push them from the darkness that surrounds us.

Today I would like to talk about our Muslim and Hindu brothers and sisters for whom I entertain great love knowing the love that Jesus has for them and for all humanity in his saving death on the cross where he suffered and died for us all. Jesus has and entertains great love for all of all faiths and views and dearly loves our Muslim and Hindu brothers and sisters. I do want to speak of and intend no offense of the problems in Hindu and Muslim societies and their systems. Muslim countries present many problems and difficulties in their operation and presence. In Saudi Arabia, no church can be erected or bible distributed. Until recently, women could not drive and all are covered and cannot drink men and women alike. In Pakistan there are blasphemy laws bringing execution for saying anything against Mohammed. I witnessed on a video the stoning of a woman in Afghanistan for some sort of sexual infraction. The Coptic church and Coptic Christians are regularly persecuted in Egypt; child marriages to sixty-year-old men is endorsed in Yemen; and Christians are regularly murdered and tortured and raped in Nigeria. I have nothing but love for my Muslim brothers and sisters but these societies and countries present problems for those who live in them. In India, the racially based caste system is an integral part of the Hindu religious system; although the government is passing legislation addressing the problem, it is far from elimination. Hinduism is a past polytheist system of gods and goddesses harking back to the Greco-Roman pantheon. And so I say and ask, why, if they can practice their religions freely in their countries, do they come to the USA?

I propose an answer that many will not like. The west has a Christian basis and background or, better put, the west has Christ and his eternal love. Jesus is not overtly present and stated but Christ and his church have been an integral part of western culture for some 2,000 years. The west has produced Albert Schweitzer and Mother Teresa. The church and Jesus are not far beneath the surface in western society and it is for this reason and its truth that Muslims and Hindus come to the west. They come for a system that has the love of Jesus. Their coming to the west is a statement and admission of their coming to the west for the Christian faith and their decision to come is a decision to be and adopt the Christian faith. They may not say so but their actions prove otherwise.