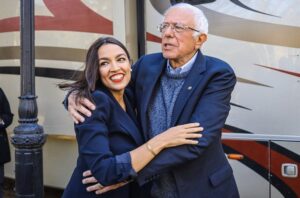 “Illegal Immigration and the Responses of Congresswomen Grace Meng and Alexandria Ocasio-Cortez,” by Andrew J. Schatkin

Ladies and Gentlemen, my fellow thinkers, discerners, the politically incorrect, and those citizens who wish and have the desire not to be led by media propaganda and political hype but instead go beneath the surface to the heart and purpose of finding and revealing truth and the full facts, not to be fooled by political code words, right or left, and empty political slogans and, in fact, misstatements and lies and falsehoods having the sole purpose of manipulation and making fools of us all in our thinking causing us not to think:

I wish first to speak on the subject of illegal immigration, or using the liberals’ hidden cover word, ‘undocumented immigration.’ There is an issue in this country of who in fact is an immigrant and some do confuse the issue and say those illegally here and gaining the benefit of our medical services, jobs, and educational system have some sort of right as immigrants in that respect when in fact they are not immigrations at all but law breakers and law violators, and to understand their status and situation otherwise is to be manipulated and fooled. As we know, corporate America loves low wage and no benefit labor, as it serves to edge out our vulnerable and poor legal citizens desperately in need of employment to support their families

I now wish to talk about and address two congresswomen representing Queens and Bronx congressional districts, Alexandria-Ocasio-Cortez representing the 14th congressional district in Queens and the Bronx, and Grace Meng representing the 6th congressional district in Queens. I respect both of these public servants. Grace Meng was born in 1975 and is an American lawyer serving as a Democratic member of the House of Representatives. Ms. Meng was previously a member of the NY state assembly. Ms. Meng is of Taiwanese descent and is the daughter of assemblymen Jimmy Meng. She attended Stuyvesant High School and received a BA from the University of Michigan and received a Juris Doctor from Cardozo Law School. Ms. Meng states that America has always been a country of immigrants and says American culture owes its richness and complexity to the cultural contribution of immigrants. She says she has witnessed the hard work and dedication of our immigrant communities and their struggle for a better life and suggests a pathway to citizenship; reuniting children with their detained parents; and legal counsel for vulnerable immigrant populations. These are some of her suggestions.

Ms. Meng fails in her thinking and even in her proposals. The issue she fails to address is that these persons she speaks of are not immigrants but persons who are here without legal basis, displacing and competing with our hardworking legal immigrants who have struggled to go through the legal processes to obtain citizenship. She lauds the contributions of immigrants to our system and society but fails to make the distinction between those who go and have gone through our legal system and obtained legal citizenship and those who have not and who seek to fool and manipulate us into thinking that they are immigrants when they are not and are lying their way by that terminology into our system which they have no right to be in at all. Compassion, I suggest to Ms. Meng, is reserved for those who obey the law, not those who disobey and defy it. Ms. Meng’s suggestion of reuniting children seems to involve the idea that the children should be detained with their parents, something the president and ICE and Homeland Security rightly wish to avoid. I find it unacceptable that those who have come here defying our system should be given counsel when they have come here as it were slapping our system in the face. I ask Ms. Meng to address the significant issue of law violation and law breaking and address her compassion and concern and reforms to our citizens that have come here obeying the law not defying and disregarding it.

Let me now speak of and address Rep. Alexandria Ocasio-Cortez. Ms. Cortez was born in 1989. She defeated Joe Crowley, a 10-term incumbent in the primary and defeated her republican opponent in the November 2018 election. Taking office at the age of 29, she is the youngest woman to serve in Congress. She received her AB degree from Boston University and advocates a platform of Medicare for all; a federal jobs guarantee; abolishing ICE; and free public college and trade school.

Ms. Cortez fails in her reasoning, which is faulty. She does not address the fact and issue that those seeking to come her illegally are breaking the law and defying our legal system They are not acting ‘more American’ since our nation is a nation of laws and based on laws and to say that those who come here with the intention and goal of coming here illegally are not people who we want here kicking our system in the face and making fools us all. Rethink, Ms. Cortez, your reasoning and, on this basis, if you are intellectually, honest please reach an entirely different concussion. I ask you not to praise and laud those who have no respect for our laws and our constitution; instead, reserve your compassion and love for those who have come here obeying the law and our system and bear in mind the graves of American soldiers in the Pacific and Europe who defended our freedoms and our legal and constitutional system.