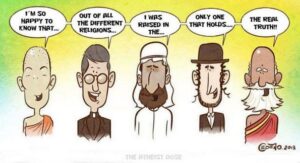 There is a bromide or political code to the effect that all religions are the same and, further, that all religions lead to god. Of course, as a Christian, I cannot agree or accept this as truth since Christian believe our religion to be revealed in the bible or the word of god and, more finally, and more important, that there has been and is a full revelation of god’s nature in his only begotten son Jesus Christ, who is the ultimate and only route we believe to reach and know and understand god fully. No one has to believe or adhere to this revelation and to do so or not do so is quite voluntary. Nevertheless, I believe and adhere to this revelation.

We must ask what is the source of the current jargon, if you will, that all religions are the same and that all religions lead to god. I do think that this statement of belief has a political origin in the sense that our very diverse society seeks political inclusion and so some tell us what I have just said in order, I think, to eliminate friction and any differences. In short, these so called beliefs that all religions are the same and all lead to god have, I think, a political origin, a sort of inclusion of secularism and politics into theology and religious beliefs and religious thought systems where politics and secularism have no place.

More to the point, these statements are not true. For starters, the adherents and proponents of these religious would be vastly surprised to find their theology and beliefs to be the same.
Let us talk a look at some religious systems and see if these statements are true. I must note here that I am most happy to concede that all religions are seeking in their own way and fashion to reach and understand god, although, as I say, the revealed religion of Christianity and Judaism is a revelation, which is final and irreplaceable, at least to me.

Let me take a look at some religious and religious systems. There are occult religions, such as animism, witchcraft, and Maggid, which are concerned with spirit and evil spirits.
They may dwell in the forest and are connected with the African witch doctors. This is one religious manifestation, albeit primitive, and not so prevalent outside of more primitive societies. Second, there are religions connected with kings in Egypt and the Roman Emperor. There is the religion of Buddhism, which involves self-renunciation and is a rejection of the material world and leads to the elimination of self into the One. It is noteworthy that Christianity affirms the material world as created by god and pronounced good and the revelation that god revealed himself ultimately and finally in the person of Christ in a human body, who lived a human life, and then died and rose again with a human body. The doctrine in Christianity says in its significant affirmation of the body and the material world that the material world will be reborn and remade and that all the dead will rise with their bodies, at least continuous with their earthly bodies, to a final judgment. Then there are fertility cults that worship sex. This religion is most ancient and is present is Hindu temples in the form of sexually depicted statutes, as well as it was widely present in the fertility cults of the Near East, such as temple prostitution, where sex was connected, however rightly or wrongly, with assuring the rain, crops, and the harvest. Finally, there are prophetic religions such as Islam, which I greatly respect and seek to understand because I take the view that Jesus died for all mankind, including our Muslim brothers and sisters. But Islam does not offer the worshiper intimacy with Allah unlike Christianity, whose god is made of love and whose god wants our friendship. Islam offers no intimacy with god; Allah never reveals himself to the worshiper; and the worshiper prays but cannot be said to know him.

In the end, there are the revealed religions of Judaism and Christianity which involve a personal god. Can we believe that all religions leads to god given the information I have just l presented? There is the impersonal god of Islam; Buddhism believes in no god and leads to some sort of personal extinction; and Hinduism, at least in its temples, involves ancient polytheism and idols and many incarnations. I say that I have only a skeletal knowledge of these various religions and do respect them in every way, but I only say whatever virtues and goodness may be present in them I stand by the obvious truth that these religions cannot and are not the same and do not lead to the same god when their understanding of good is so vastly and decidedly different. I add that I respect, as a Christian, all religions and their members, but have set about here to clarify what I think is incorrect and mistaken thinking in that these religions are the same and lead to the same god when that god’s attributes are so vastly different, and, in some instances, there is no god at all, such as in Buddhism. The modern world has largely rejected ancient stone idols and idolatry, held a god by some Hindus, but many hold a belief in a higher monotheistic system. I end by saying that yes there are many religions, all trying to reach and grasp, but all are vastly different in their beliefs and we should not be manipulated and fooled by false politics on this issue since we all, I hope, are honest thinkers and intellectually honest and discerning, not to be led astray by what I see as political code merely said to satisfy the feelings of all. It is better to acknowledge the truth and reality of differences rather than set about to deny these differences in the name of political correctness.

I am indebted for many of these ideas and information from the book, “But Don’t All Religions Lead to God?” by Michael Green, pub. by Baker in 2002, pp.19-25.