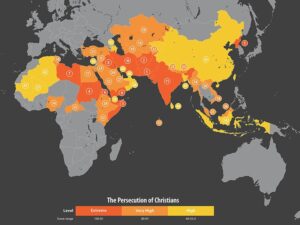 “Another Comment and Take on the Worldwide Persecution of Christians worldwide and in the USA,” by Andrew J. Schatkin

Prior to this essay, I analyzed and commented on the ongoing, worldwide persecution of Christians. I spoke of the outright genocide of Christians in the Middle East by the forces of Islamic fundamentalism. I made clear that I had and entertained no hostility or hatred or discrimination to my Muslim brothers and sisters in Christ who suffered and died for them on the cross. I stated that these violent actions were the acts of a minority within that religious/political system. I also spoke of the killings of Christians in Nigeria ongoing again by Islamic fundamentalist, albeit a minority movement within certain countries in that religious/political/cultural system. I also spoke of Darfur and persecution of Christians in China and by forces in Turkey. But I did not touch upon the reality of the persecution of the Christian faith and the Christian system of thought in these United States.

First, the media or at least the mainline media, allow no Christian to be heard or to speak. No anchor on CNN features or allows Christians to heard or featured or interviewed. Second, the academic community does not permit Christian belief to be heard or discussed and certainly no professor overtly Christian is likely to be hired or heard. If there is an attempt to bring the pro-life position to our young people of college age, it is barred or shut down. The seminary faculties in our country, with some exceptions, bar the historical Christian faith which has as its base in the biblical supernatural revelation and the historicity of the bible, and the events and miracles reported in it. In fact, our seminaries, for the most part, take the position that the biblical miracles and supernatural revelation are not in consonance with science and scholarship and are of the view those events did not happen or were fictional constructs, and the miracles of the early church are seen as fiction. I do not say what I say here is uniformly true but at least has some truth that there are forces in our society that are opposed to the Christian faith or at least are uncomfortable with it and, if not bar it, then make it clear they do not want it heard in the academic precincts. The persecution of the church has moved, I think, from ideology and thought to assassination and murder.

Let me give you some examples: In November of 2017, 26 people were fatally shot and 20 wounded in the course of an attack during a mass shooting in Sutherland Springs, Texas. In a church in September of 1999, a gunman entered Wedgewood Baptist church and killed seven and wounded seven. At a Baptist church in Fort Worth, Texas, a man with a handgun fired on and killed 6 people. Most important is the Columbine High School massacre in which Rachel Scott was reportedly shot prior to telling her shooter that she still believed god. Before she was fatally killed Cassie Bernall was reportedly asked whether she still believed in god and responded yes.

The worldwide persecution of Christians has been ongoing for many years and has been unmentioned and virtually ignored by the left and its ideology. I would love to hear Bernie Sanders and Michael Bloomberg and their response to the events that I have spoken of here. Do the lives of these murder victims and their deaths mean nothing to the Democratic leadership, who claim the ground of compassion and love for illegal entrants but have none for these victims of persecution and death? The Democrats claim the ground of some sort of socialist agenda and redistribution of wealth to bring equality but say nothing of these atrocities. Where, gentlemen and Mr. Schumer and Nancy Pelosi, is your compassion, your love, and your intellectual honesty? Please set about to inform me whose concern is so great for legal violators and non-existent for these martyrs whose lives will never return or be again and for a system of thought that has endured for 2,000 years, which in 400 years converted the known world and continues to bring people to its banner, yet there are obvious forces in the media and academia that are unwelcoming and opposed. Kindly, my dear candidates and office holders, provide some answers.