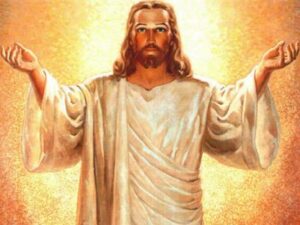 “Who is this Jesus?” by Andrew J. Schatkin

For many people in our present society, Jesus is something of an enigma and possibly misunderstood, if understood at all. Our society is increasingly diverse in religious paths and traditions and, moreover, many persons within our civil system are either agnostics, atheists, come from other religious traditions, or, more likely, may be indifferent to any sort of religious belief, as they are directed and wrapped up in their immediate material needs and meeting them. It is likely many people will find no sense of the supernatural claims of Christ to be divine and to be God but will be happy to apprehend his grand and profound moral statements and his moral vision. Let me say at the outset that to understand Jesus, what he says, and what he claims and does or, better put, to enter the world of the biblical revelation, one must enter into and apprehend and believe in the supernatural world. However, I will now, so to speak, take a walk through the Gospel of Matthew and review and come to know both the depth and profundity of Christ’s moral and ethical vision and message and his claims or divinity, his claim to be nothing more or less than God, and his claim to not only do miracles but, and this is a fantastic claim, to forgive sins.

In the first chapter of Matthew, verse 21, there is the claim that Jesus will save his people from their sins. Thus begins the fantastic claim of actually being able to forgive sins, a quality that must and must only reside in God himself. In Matthew, chapter 5, Jesus makes the unequivocal statement that the poor in spirit, or humble, are blessed. He says the same with approval of the merciful; the meek; the pure in heart; the peacemakers; and several others. These ethical statements are in defiance of the world system of power and wealth and are a challenge to those values. He teaches in Matthew, chapter 5 that whoever relaxes the commandments shall be called the least and whoever does them shall be called great. Again, Jesus is raising the ethical bar. He then says in Matthew, chapter 5, verse 22 that whoever is angry with his brother is liable to judgment and does the same as murder; that whoever insults his brother shall be liable to the council; and whoever says “you fool” shall be liable to hell fire. Thus the commandment not to kill is given new depth and meaning by Jesus. In short, Jesus in these statements is getting to the root of the problem that are the causes of and lead to murder. Later, he says looking at a woman with lust is equivalent to adultery. Again, he raises the moral and ethical bar and gets at the root of the problem that leads to adultery (Matt 5:27). Later, he alters the prohibition to not swear falsely to not swear at all (Matt 5:33). Again, Jesus here raises the moral and ethical bar and gets more exactly at the root of the problem. He advises us not to resist evil and not only to love your neighbor but to love your enemies, all significant and demanding moral and ethical advances. In Matthew 6:14, he advises us to forgive men their trespasses. He also tells us not to judge in Matthew 7:1.

These are some or the moral and ethical sayings of Jesus that challenge us and the world to be something more than we are; they raise the bar to the virtually impossible to fulfill and overcome; and they make us understand the root cause of our sins. Further, they are said to lead us to understand that it is only with the rescue and forgiveness of Christ that we can fulfill what is in fact impossible. We all are subject to anger and lust and Jesus leads us to understand that these feelings and emotions lead to the sins of murder and adultery.

Our secular friends and those of other faiths are perhaps accepting of these statements of advanced ethics and advanced moral thinking. They are not so comfortable and perhaps uncomfortable with Jesus’s claims to be God; to work miracles; and, in short, with the supernatural vision of the revealed biblical worldview. Jesus’s life begins with a miracle, the virgin birth—a birth by divine intervention—and the great miracle of his bodily resurrection in which he makes the claim that he has conquered death for us all and that through this new man we will have eternal life. Between these two supernatural events, these two miracles, are many other miracles and divine claims.

I do not recall that Mohammed claimed to be God; I do not recall Buddha making a claim of divinity; nor do I recall Confucius making a divine claim. I am not aware of any other religious leader or founder of faith making this claim and having it believed for the past 2,000 years by millions of people. In short, we have no other alternative than to regard Jesus as insane or his claim in this respect to be true. Jesus went about saying to people he forgives sins. How can a mere man and a mortal forgive all? In Matthew 8, a leper is healed and, later, the centurion servant, and Peter’s mother-in-law. Later, he calms he storm. In Matthew 9. he heals paralytic. In Mathew 9, he also raises a ruler’s daughter. In Matthew 9, he restores the sight of two blind men. Later in that chapter, a dumb demoniac’s speech is restored. In Matthew, chapter 12, he heals a man with a withered hand. In Matthew 12, again he heals a dumb man. In Matthew 14, he fed five thousand with five loaves and two fishes. In Matthew 14, he is seen walking on the water. In Matthew 15, the Canaanite woman is healed. In Matthew, chapter 17, an epileptic child is healed. In Mathew, chapter 20, two blind men have their sight restored. In Mathew. chapter 21. the fig tree is cursed.

These miracles are a clear statement of Jesus’s claim to be God and the supernatural character of the Christian religion. Jesus says more openly that he is God and comes from God. In Matthew, chapter 26, he answers a question that he is Christ the Son of God and then he says that you will see the Son of Man seated at the right hand of power and coming down from the clouds of heaven. Again, a claim of essential divinity. In Matthew, chapter 3, the spirit of God descends on Jesus at his baptism and says ‘this is my beloved Son.’ In Matthew, chapter 9, Jesus heals a paralytic and says his sins are forgiven, and then states the Son of Man has the authority to forgive sins. In Matthew, chapter 17, Jesus is transfigured and a voice from heaven says this is my beloved son with whom I am well-pleased. In Matthew, chapter 19, Jesus refers to himself as divine. At one point, Jesus looking down on Jerusalem from a hill, says he keeps sending on prophets and wise into the world, on the face of it an extraordinary claim and statement. At another point, he says that no one need fast while he is here, and that he forgives sin but owns no sin to himself. In the gospel, he continually claims upon himself to be the only way to reach and know God.

The secular modern world easily admires and accepts the moral and ethical advice he offers, but has trouble with these startling claims to be God, to achieve miraculous cures, and most startling, if not outrageous claim, to have the power to forgive sins where the sins have not been laid upon him or committed against him.

Let me conclude that you cannot have your cake and eat it too, or pick one piece of Jesus’s advice and reject the other. Jesus’s divine claim cannot be discarded. It is the Christian faith and religion. Jesus, for the convenience of trendy modernism, cannot be reduced to an ethics teacher or a dispenser of popular advice.