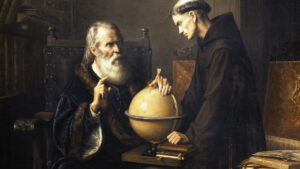 In the 16th century, Galileo, one of the world’s greatest scientists and thinkers, ran into a bit of a problem with the Roman Catholic Church and specifically the Vatican authorities at that time. It had been formerly thought that the Earth was the center of the universe. This misconception emanated from Copernicus. In fact, it is a rather reasonable assumption and is no more ridiculous in a sense than the conception that the Earth is flat since the Earth appears to be flat.

Galileo was arrested and charges and accusations were lodged against him by the religious authorities and he was virtually imprisoned for some period of time. I think the Catholic Church and their position that the Earth was the center of the universe and Galileo in his view that the Earth revolved around the sun were both right but came at the thought from different angles and different perspectives. There is no doubt that the Earth revolves around the sun. But in many ways the Earth is the center of the universe at least theologically, philosophically and metaphysically.

It appears to be the case that despite valiant attempts by scientists to prove otherwise that human beings have not been found anywhere else in the universe. Searches have been made for life at least in the planets nearby us such as Mars and Venus and nothing has been found. Thus, in a very real sense, for whatever unknown reason, humanity has made its stand on the Earth and no other place. No one knows the reason for this and there appears to some mystery in connection with this fact and phenomenon.

Humanity, in a very real sense, is the center of things since everywhere else we look and have looked we find nothing resembling life or human beings. The biblical view that the Earth is the center of things is true. Thus, the opinion of Galileo is a physical opinion alone. The conclusion of Galileo was a statement of fact. When we know that everywhere we look we find nothing but darkness and void, and on the Earth alone life and humanity have developed, we have the absolute confirmation of the Genesis story in Chapter 1 that God created the heavens and the
Earth. The problem at the time of the controversy of the Church with Galileo is that both agreed but neither understood how both agreed. The Roman Catholic Church felt threatened in its theological stance but in reality was not by the conclusion of Galileo that the Earth revolved around the sun. There was no challenge there but merely an observation of fact that failed to change the reality of what is going on, namely that only here on Earth do we find humanity.

I am confident that whatever happens to humans, God in his mercy and grace will move history as he chooses, and for whatever end he wishes, to bring about whatever he wants for us all in whatever process he chooses to employ. The heavens will be there and humanity and the Earth alone will move to whatever inevitable conclusion is ordained. The Earth may revolve around the sun but in this pinprick of life we call Earth there is something going on and as it occurs and moves along it will bring an end that none of us at the present time can understand or know. It is the absolute truth that humanity and the Earth are the center of things. Galileo was not wrong nor was the church. They both engaged in a misunderstanding and both were right.

This essay is modified from Chapter 7 of my book “Essays on Faith Politics, Culture and Philosophy,” pp. 19-20, published in 2016 by the University Press of America.