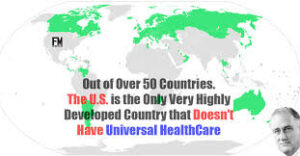 “Should We Have a System of Universal Health Care for All, Regardless of Income Status?” by Andrew J. Schatkin

Let me begin this essay by saying that I am not socialist and I do not take up the cudgel of socialized medicine or even think we should have a socialist system as opposed to free market capitalism. Although socialism has its points of attraction in seeking to eliminate classes and equalize wealth and income distribution and provide some sort of employment for all as well as housing, I do say that socialism does not work very well for lack of incentives. This has been proven true. The issue I do raise here and open discussion for is: Should healthcare be only a matter of money or, rather, should we in the USA have a system of universal health care, or at least some degree of socialization in the availability of medical service and drugs? Better put, should anyone be denied competent, if not outstanding, medical care by reason of their income and relative poverty? Do we want a society on the Indian model where people die in the streets because of their lack of funds to obtain medical and hospital care, only to be cared for by a most outstanding Christian like Mother Teresa? I must be clear that I make no criticism or judgment on India and its poverty but only make some sort of factual observation of the Indian society who are dealing as best they can with a huge population many of whom suffer in great poverty and possibly cannot obtain adequate employment.

Personally, I do not happen to think, 1. that someone’s health and well-being should be connected with their economic caste or status, or 2. that anyone should have to pay a lot of money and enrich people who are committed to curing them. Doctors argue that they have long years of education and possibly, in the case of surgeons, a shortened earning lifetime and, therefore, they should make a lot of money. I do not think that follows. One undertakes to do something in life, whether building a house, creating and raising a family, or, as I do, writing books and articles and speaking on radio broadcasts, for the good of the task itself and not necessarily to engage in personal self-enrichment and self-aggrandizement.’

I hesitate to say this but I have come to believe that when money becomes the sole object, corruption takes place and sets in. To me it is an outrage and disgrace that caring and curing should be connected with wealth, first, and second that doctors should become wealthy because they render medical care and health.In Europe and in most other countries medical care is basically subsidized and given and made available to all regardless of their funds or economic status. Mothers are given extended maternity leave and given the opportunity to return to work. The capitalist medical profession argues, 1. that there are emergency rooms to care for people who cannot afford medical care, and 2. that a private system provides better medical care than a socialized system. This is a run around and a fallacy and nothing more than an excuse for continued self-enrichment on the part of the medical profession.

Committed professional physicians, one hopes, will provide excellent and caring medical treatment even though they may earn less money. If it is their criterion and choice to give good medical treatment only to those who pay them a lot of money, in my opinion, not only are they unfit as physicians they are unfit as human beings. Thus I call for in this essay for some sort of universal health care. Health should not be a matter of money. The better medical care provided to all classes of society, the better chance we have for all persons to be enabled to grow, support their families, and contribute to society. Medicine, when it is made a matter solely of money, leaves people in the wayside, basically to die. Money-oriented medical care is uncaring and basically stupid.

For every person who falls by the wayside and is not cared for because they lack funds, in a universal health care system they are raised up and we all society is improved because they are raised up to live in a better world. Universal health care makes a better world for us all. For every person who has the opportunity to have medical care, there will be some person who will find a cure for cancer. The person who was excluded for lack of access to adequate medical care will and would not have the opportunity to find that cure for cancer or write that great book.

I call for at least a degree of universal health care and some socialization of medicine because I do not think that corrupt and twisted money values should be a part of caring, and concern for the health and well-being of each and every person.

This essay is taken, with alterations and modifications, from my book, “Essays on the Christian Worldview,” pp. 94-95, published in 2011 by Hamilton Books.