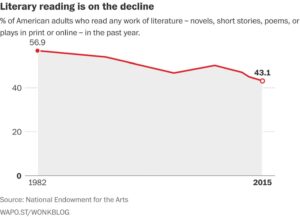 “Is Our Society and Educational System Producing a Nation of Illiterates?” by Andrew J. Schatkin

In this essay I will discuss whether or not our educational system in some sort of crisis and. I believe—and I say this with sadness and a degree of tragedy—that we are we producing a nation of functional illiterates who perhaps once they leave high school or college may never read a book and may not be able to read beyond an sixth- or eighth-grade level.

The other issue is, “Is critical literary and philosophical knowledge being handed down and disseminated?” It would appear not. Many college students, fed with technology, cell phones, emails, and computers may never read the significant and terribly important work of the Western canon and may graduate from college lacking knowledge and exposure
to the great works of classical music, whether Bach, Mozart Beethoven, Wagner, or Verdi. These students are in a state of acute intellectual deprivation.

How serious is the crisis already? I met a lawyer some years ago who never heard of the great English epic poet John Milton. Not to read and absorb the poetry of Milton is to miss out on one of the most powerful minds that have ever lived who pinpointed the Fall of Man into sin as the source of all evil, death, and wickedness in the world. Not to read and reread John Milton is to miss out on one the world’s seminal thinkers, whether you agree with him or not, whose mind was so great and focused that he wrote Paradise Lost, Paradise Regained, and Samson Agonistes while blind.

A college student I met never heard of Leo Tolstoy, certainly one the world’s great writers and great thinkers. Indeed, Maxim Gorky is quoted as saying the world came to halt when Tolstoy died. Tolstoy espoused primitive Christianity and M. K.Gandhi referred to himself as Tolstoy’s humble follower. Their beliefs have close affinities, including the doctrine of nonviolence and the belief that the kingdom of god exists within man. Gandhi’s campaign of civil disobedience and passive resistance, and his abhorrence of western progress, all owe much to Tolstoy.

Do our young people read Plato and Aristotle in college, or read the Greek plays and the Iliad and the Odyssey? Do they read the great English poets such as Keats; Shelley; Byron; Donne; Spenser; and Tennyson? What and who are they being deprived of? Without this knowledge and these writers being handed down, it is safe to predict and say that our young people will on some level be functionally and essentially illiterate. Literacy, if it is the goal and is to be obtained and happen and occur, can only take root through the reading and absorbing the great works of philosophy and literature of which I speak.

An illiterate society is a society doomed to bring us all down to be ruled by sort of darkness and ignorance and the result could well be that in the absence of this knowledge our democratic system will be at risk where people more and more easily can be manipulated and fooled by slogans and words of political correctness and hype. Alas, without literacy there is and can be no critical thinking or any sort of thinking at all.