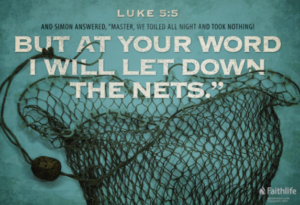 My dear Christians and non-Christians and you of all faiths and thoughts and all views and opinions I bid you and ask you to join with me in another voyage of intellectual discovery where those who may wish to engage in critical thinking and do not engage in and accept media lies, falsehoods, political code words, and hype can join in the effort to gain truth and facts amid the barrage of corruption and virtual darkness we are confronted with and made almost fools of. I welcome you in this quest and task of attaining and coming to know intellectual honesty and honest discernment. Join with me in this voyage of discovery to get at and find what is valid and authentic in this world of confusion and do come with me in tearing apart the curtain of lies and darkness that hides from us what is truth and facts.

I will once again set about to explain and interpret another gospel passage, this time found in the gospel of Luke Chapter 5 vv. 1-11 and do so with hesitation and humility and I am honored to have the great privilege of even attempting to grasp and comprehend the words and mind of the son of god; the savior of the world; and the redeemer of all mankind and all generations present, to come, and in the past. The words of this gospel passage are as follows: And while the people pressed upon him to hear the word of God, he was standing by Lake Gennesaret. And he saw two boats by the lake; but the fishermen had gone out of them and were washing their nets. Getting into one of the boats, which was Simon’s, he asked him to put out a little from land. And he sat down and taught the people from the boat. And when he had ceased speaking, he said to Simon “Put into the deep and let down your nets for a catch.” And Simon answered “Master, we toiled all night and took nothing! But at your word I will let down the nets.” And when they had done this they enclosed a great shoal of fish; and as their nets were breaking they beckoned to their partners in the other boat to come and help them. And they came and filled the boats, so that they began to sink. But when Simon Peter saw it, he fell down at Jesus’s knees saying “Depart from me for I am a sinful man O Lord.” For he was astonished and all that were with him at the catch of fish which they had taken; and so also were James and John, sons of Zebedee, who were partners with Simon. And Jesus said to Simon “Do not be afraid; henceforth you will be catching men.” And when they had brought their boats to land, they left everything and followed him.

This gospel passage had and offers to the readers and listener many threats and strands of possible interpretation. Jesus is presented as teaching and sees two boats which the fisherman had gone out of, and were washing their nets. Jesus got into one of the boats which was Simon’s and asked to put him out from land and again taught the people as he sat down in the boat. The scenario is twice Jesus’s teaching: first, standing by the lake Gennesaret, and then continuing to teach from the boat. And then when he finished teaching from the boat he tells Simon what to do. It is important to remember here that it is Simon who is then instructed to let their nets for a catch and Simon answers they have toiled all night and have taken nothing and obeys Jesus and lets down the nets and then miracle of miracles they enclosed a great shoal of fish and their nets were breaking. They asked their partners for help and they came and filed both boats so that they began to sink. This is the first strand or element of this gospel passage. Jesus is the teacher by the lake and in the boats and as the teacher and the agent of the divine and as evidence of his divinity these fishermen who had previously before Jesus’s arrival had been unable to catch any fish all night after great toil now under so to speak divine supervision and presence of god in Christ make this huge haul. Simon is instructed to let down his nets for Simon Peter is the agent of the new divine mission. Peter is called to be the leader of this universal divine mission. When Peter saw this, he fell down on his knees and said “Depart from me from me for I am sinful man O Lord.”

What does this passage mean? I see two possible interpretations. One that in the presence of god in Christ and in the presence of this miracle he realizes his sinful nature. Second, we are told, and this interpretation may be closer to the truth, Peter was astonished at the catch as were James and John. Peter’s expression of sin is an expression of awe at this miraculous event. The promise concerning the world mission is entrusted to Peter alone where Jesus says ‘do not be afraid; henceforth you will be catching men.’ This means that Peter is entrusted this new religion and this new mission to the whole world beyond its origin and beginnings in Palestinian Jewish nationalism. And in response to the words of Jesus and the event itself a miracle, and Jesus’s revelation of his divinity and his divine claim, they brought their boats to land and left everything and followed him. The term ‘God’s word’ can be said to refer to the Christian message but here refers to Jesus’s words and message. Peter recognizes the lord in the catch of fish. We are told Peter will be catching men and women and bringing them salvation and newness of life, all done with the bait of God’s word, and all three companions here choose to follow Jesus and his message and destiny.

My dear friends, colleagues and fellow thinkers and men and women of the mind and soul and spirit, I hope and pray that you have obtained some insights and benefits from this interpretation of this passage from the gospel of Luke and urge you to reflect first on what I have written here and, more important, I urge you to return to and read and reread this text to gain its full and complete meaning and thrust. The words of Jesus and the events in his life cannot be given enough of our concern and attention as the product of the mind of God and the means to salvation.