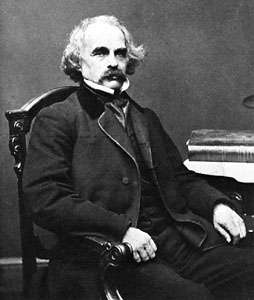 “A Biographical Sketch of the Life and Work of Nathaniel Hawthorne,” by Andrew J. Schatkin

My dear fellow thinkers and lovers of literature in all its forms and all of you of all points of view, ideas, and opinions I bid and ask you to join with me in another voyage of intellectual discovery where those who may wish to engage in critical thinking and do not engage and accept media lies, falsehoods, political code words, and hype can and will join with me in the effort to gain truth and facts amid the barrage of corruption and virtual darkness we are confronted with and befuddled and made effective fools of. I welcome you in this quest and task of attaining and coming to know intellectual honesty and honest discernment. Join with me in this voyage of discovery to get at and find what is valid and authentic in this present world of confusion and please do come with me in tearing apart the curtain of lies and darkness that hides from us what is truth and facts.

Today I will write and speak of one of one of our greatest of American writers, Nathaniel Hawthorne and will speak of his life and literary works. In these pages I have spoken with great and enduring pleasure of some of my favorite English and American prose writers, novelists, and poets who I dearly love and treasure. I have written of the life and works of such poets as TS Eliot; Shelley; Keats; and Byron; and such novelists as EM Forster; Kipling; Dickens; Trollope; Thackeray; Jane Austen; Conrad; Sinclair Lewis; Steinbeck; and many others. None of these greats of world literature and world thinking are far from my thoughts and bedside and all are my daily companions and will never ever be far from me to the very end and conclusion of my life.

Hawthorne was born in 1804 in Salem, Massachusetts. His ancestors include John Hawthorne, the only judge from the Salem Witch Trials who never repented his involvement, and entered Bowdoin college in 1821 and graduated in 1825. He published his first literary work the novel Fahshawe in 1837 he published a short story collection “Twice Told Tales.” He worked at the Boston Custom House and joined Brook Farm transcendentalist community and married in 1842 and published the Scarlet Letter in 1850 followed by other novels. He obtained a position as consul in Europe and he returned to Concord in 1860 and died in 1864. His writings center on New England and their focus is anti-Puritan and his works center on evil and sin and his works have often moral messages. Hawthorne was born in 1804 in Salem and his original ancestor William Hathorne became an important member of the Massachusetts Bay Colony and held many political positions including judge. His father was a sea captain who died in 1808 of yellow fever. After his death the family moved to Salem and in 1816 the family moved into a house built for them in Maine. In 1819 he was sent back to Salem for school. With financial support he was sent to Bowdoin College. In 1836 he served as the editor of the American Magazine of Useful and Entertaining Knowledge and he accepted a position at the Boston Custom House. In 1839, he contributed short stories to various magazines and collected these stories into a volume in 1837 called “He Twice Told Tales.” He joined the utopian community Brook Farm in 1841 mainly to save money for his marriage. He married Sophia Peabody in1842. The couple moved to the Old Manse in Concord and there he wrote most of the tales collected in the collection Mosses from an Old Manse. His Brook Farm adventure became the inspiration for his novel the ‘”Blithedale Romance” The Hawthornes had three children. In 1845 the family moved to Salem. In 1846 Hawthorne was appointed Surveyor for the District of Salem. He lost this position in 1848 due to a change in administration in Washington after the election of 1848. He published The Scarlet Letter in 1850 which became a best seller. In 1850 the family moved to a farmhouse near Lenox, Mass. While ln the Berkshires he wrote “The House of the Seven Gables,” published in 1851 and in 1852 wrote the “The Blithedale Romance” and in 1851 published a collection of short stories retelling myths. In 1852 the family returned to Concord where they lived until 1853. That year Hawthorne wrote a campaign biography of President Franklin Pierce and was rewarded with the position as consul in Liverpool after the election of Pierce. Shortly after the publication of “Tanglewood Tales’” in 1860 he published “The Marble Faun.” He died in 1864 in New Hampshire. Hawthorne’s works belong to dark romanticism tales that suggest that guilt, sin, and evil are inherent qualities in humanity. Many of his works are inspired by Puritan New England. His works combine historical romance with symbolism. In his early career he was predominantly a writer of short stories. Hawthorne’s four major novels or romances were written between 1850 and 1860. Feminist scholars have examined Hawthorne’s depiction of women.

My dear friends, in my library in my home I have the first novel of Hawthorne I ever read and greatly enjoyed “The House of the Seven Gables.” I read this book when I was fifteen and have always loved and enjoyed it. I also read at that same his equally great novel “The Scarlet Letter.” Both continue to hold me with their themes of guilt sin retribution and their deep and dark symbolism and psychological depth. The same is true of his short stories many but not all of which I have read. Hawthorne when I read and absorb him takes me back the Puritan American past which holds me to his work. He is one of my all-time favorites one on my all-time literary hit list. I return to him in my mind and spirit each day and am always ready to pick him up and read and reread this greatest of writers I urge you parents and children to do the same. You will not regret this literary adventure with this deepest most profound and captivating authors and writers of the American literary canon.