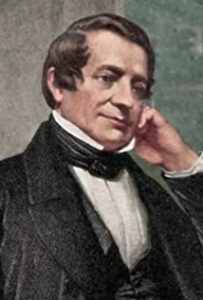 “A Biographical Sketch of the Life and Literary Works of Washington Irving,” by Andrew J. Schatkin

My dear fellow thinkers and lovers of literature in all its forms and you of all points of view, ideas, and opinions, I bid and ask you to join with me in another voyage of intellectual discovery. I welcome you in this quest and task of attaining and coming to know intellectual honesty and honest discernment. Join with me in this voyage of literary discovery to get at and find what is valid and authentic in this present world of confusion and please do come with me in tearing apart whatever curtain of lies and darkness that hides from us what is truth and facts.

Today I will write and speak of one of our greatest of American writers, Washington Irving and will speak of his life and literary works. In these pages I have spoken of with great and enduring pleasure of some of my favorite English and American prose writers, poets, and novelists who I dearly love and treasure. I have written of the life and works of such poets as TS Eliot; Shelley; Keats; and Byron; and such novelists as EM Forster; Kipling; Dickens; Trollope; Thackeray; Jane Austen; Conrad; Sinclair Lewis; Steinbeck; and many others. None of these greats of world literature and world thinking are far from my thoughts and bedside and all are my daily companions and will never be from my thoughts and will never be far from me to the very end and conclusion of my life.

Washington Irving was born in 1784 and died in 1859 and was an American short story writer; essayist; biographer; historian and diplomat of the early 19th century. He is best known for his two most famous short stories, “Rip Van Winkle” and “The Legend of Sleepy Hollow,” both which appeared in his collection “The Sketch Book of Geoffrey Crayon Gent.” He wrote a number of biographies and served as American Ambassador to Spain in the 1840s.

He was born in Manhattan to a merchant family. He moved to England for the family business in 1815. He published regularly throughout his life and 8 months before his death completed a five-volume biography of George Washington. Irving was the first of American writers to gain acclaim in Europe. The Irving family originally of Scotland and England settled in Manhattan and were part of the city’s merchant class. Irving was an uninterested student and preferred stories and drama. In 1798 he stayed for a time in Tarrytown NY due to an outbreak of yellow fever in NYC. He began writing letters to the New York Morning Chronicle in 1802 submitting commentaries on the city’s social and theater scene. He toured Europe from 1804 to 1806. He created a literary magazine in 1807 called Salmagundi where he mocked New York Culture and Politics. In 1809 he wrote a History of New York by Diedrich Knickerbocker which brought him some success. He became editor of Analectic Magazine where he wrote biographies of naval heroes. He initially opposed the War of 1812 but did enlist. He left for England in 1815 to rescue the family business and remained in Europe for the next 17 years. He continued writing in 1817 and 1818. Irving spent much time traveling in Europe in 1821 in search of material for his writing. After the publication of the Sketch Book his reputation soared. In 1822 he published “Bracebridge Hall,” consisting of fifty loosely connected stories and essays. He travelled to Germany in 1822 and in 1824 published “Tales of a Traveller.” He travelled to Spain where with full access to the American Consul’s library he wrote a history of the life and voyages of Christopher Columbus, which was published in 1828, and a year later published “Chronicle of the Conquest of Granada” and in 1831 the “Voyages and Discoveries of the Companions of Columbus.” In 1829 he became Secretary of the American Legation in London. Irving returned to writing and published “Tales of the Alhambra” in 1832. Irving returned to the United States in 1832 after 17 years abroad. He wrote a “Tour on the Prairies” which related his recent travels on the frontier. It was a popular success. He wrote another western book in 1837 “The Adventures of Captain Bonneville.” These western books were well received in the Unites States. In 1835 he purchased a cottage in Tarrytown in 1841 and became a regular contributor to the Knickerbocker magazine in 1839. Irving was appointed as minister to Spain by President John Tyler ln 1842. He returned from Spain in September of 1846.

He published a short story collection in 1855 entitled “Wolfert’s Roost” and published between 1855 and 1859 a five-volume biography of President George Washington. He died in his cottage in Tarrytown in 1859.Irving is credited as being the first American Man of Letters and was the first to earn money by his pen and was the first truly American short story writer. His stories were firmly set in the United States. He popularized the name Gotham for New York City and is credited with inventing the expression ‘Almighty Dollar.’

Dear Friends and my fellow lovers of literature and thought and all sorts and forms of verbal expression whether poetry or prose this concludes my little literary excursus on this great and notable American author. I have not read his voluminous works but fondly recollect his wonderful and enduring short stories whether “The Legend of Sleepy Hollow” and “Rip Van Winkle.” I read them in my high school years and they do stick in mind I look forward to the day when future generations may discover if not rediscover this treasure of our American literary past.

I wish to make clear acknowledge the Wikipedia articles on this and the other writers I have written about in these pages.