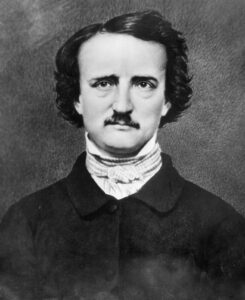 “A Biographical Sketch of one of America’s Greatest and Most Original of Writers, Edgar Allan Poe,” by Andrew J. Schatkin

My dear friends and colleague and fellow lovers of great literature both American and English and you of all thoughts, and views and opinions please join with me in another voyage of intellectual discovery where you may come with me in the task of critical thinking and choose not to engage in media lies, falsehoods, political code words and hyperbole and be one with me in the effort to gain truth and facts amid the barrage of corruption and virtual darkness we are confronted with and befuddled and made effective fools of. I welcome you in this quest and task of attaining and coming to know intellectual honesty and honest discernment. Do join with me in this voyage of intellectual discovery to get at and find what is valid and authentic in the present world of confusion and seek with me to tear apart the curtain of lies and darkness that hides from us what is truth and facts.

Today I have the great privilege and honor of speaking of and presenting the life and works of one of the greatest American writers, Edgar Allan Poe, the author of many short stories and poems that once begun I cannot put down and once read through engages our minds and spirits and souls as few works of prose and poetry can do.

I am a great fan of English and American literature and when I read these authors such as Dickens; Keats; Steinbeck; Kipling; and many others. My mind is raised to a different level and I acquire in reading them a different level of understanding and am lifted up intellectually, emotionally, and spiritually. I have never regretted the time spent with them and being exposed to them and absorbing their greatness despite our American society telling us on a constant basis that time spent with them has no practical value producing no income. A life without great literature is a life cheated of what these greatest of minds have to offer us.

Poe was born in 1809 and died in 1849 and was an American writer, poet, editor, and literary critic and is best known for his poetry and short stories, in particular his tales of mystery and science fiction and in the horror and macabre. He was born in Boston to actors and his mother died in 1811 and his father abandoned the family in 1810. Poe was taken in with a family in Richmond, Virginia. Poe attended the University of Virginia and left after a year due to lack of funds and enlisted in the army in1827 and then began his writing career. Poe later failed as a cadet at West Point and switched his focus to prose writing for journals and periodicals and his work took him to many cities and he married his 13-year-old cousin in 1836 who died in 1847. Poe died in Baltimore in 1849 at the age of 40 and the cause of his death was unknown.

The family sailed to England in 1815 where Poe attended various schools but Poe moved back to Richmond in 1820. In 1824 he served as the lieutenant in the Richmond youth honor guard. In 1826, Poe registered at the University of Virginia to study modern ancient languages but left after a year due to lack of funds. He then traveled to Boston in 1827 and enlisted in the army. In 1827 of that same year he released his first book of poetry and only fifty copies were printed and he served for two years in the army. Poe was discharged in 1829 and traveled to West Point and entered as a cadet in 1830. Poe decided to leave the school and left for New York in 1831 and released another volume of poems. Poe returned to Baltimore in 1831 and sought to begin a career as a writer. After his attempts at poetry he turned to prose. He did place some stories in periodicals and Poe became the assistant editor of the Southern Literary Messenger in 1835. He married his 13-year-old cousin in 1835 when he was twenty-six. Poe remained at the Messenger until 1837. He published a novel “The Narrative of Arthur Gordon Pym” in 1838 and then became the assistant editor of Burton’s Gentleman’s Magazine. In 1839, he left this position after a year and found a position as a writer and editor of Graham’s Magazine. Around this time Poe attempted to gain position with President John Tyler as a member of the Whig Party. His wife became ill and Poe left this position to work returning to NY at the Evening Mirror and then became the editor of the Broadway Journal and later its owner. His poem “The Raven” appeared in the Evening Mirror to great popular success. The Broadway Journal failed in 1846 and Poe moved to a cottage in Fordham, NY. Virginia, his wife, died in 1847. He died in Baltimore in October of 1849 and the cause of his death was and is a mystery.

Poe is best known for gothic and horror fiction and his most frequent themes deal with questions of death and concerns for premature burial and mourning. Many of his works are considered part of the dark romanticism genre but he also wrote satires; humor tales; and hoaxes. Poe believed that the writer should calculate every sentiment and idea and that a work of literature should focus on a specific effect and should be brief.

During his lifetime Poe was mostly recognized as a literary critic and was also known as a writer of fiction and founded the detective story genre featuring C. Auguste Dupin. Poe’s work also influenced the nascent genre of science fiction and many of his tales were in the horror genre and influenced that genre.

From my high school, I had and possessed all the tales and poems of this writer and in fact in 8th grade was asked and did memorize Poe’s great and enduring poem the Raven. I have his works in my library and many of his tales are and will always be part of me including “The Black Cat”; “The Gold Bug”; “The Fall of the House of the House of Usher”; “The Masque of Red Death”; “The Murders in the Rue Morgue”; “The Pit and the Pendulum”; “The Premature Burial”; “The Purloined Letter”; and “The Tell Tale Heart.” I have read all these short stories and found them all highly original and interesting and captivating and they will ever and always will be part of me forever.

My friends and fellow lovers of great literature, if you have not read the works poetry and tales of this great writer make haste to do so how. You will forget the trouble you may take to get the work of this author and read and read and reread till you cannot stop. Tell your child about this writer; take them to the library and take them to the nearest book store and give them the works poems and poetry of Poe to read and read his poems and short stories to your child who I am convinced will be hypnotized by his work.