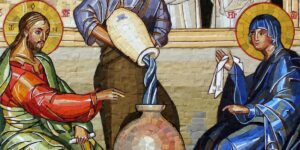 “The Wedding at Cana and Jesus Changing Water into Wine, from John 2:1-11,” by Andrew J. Schatkin

Ladies and Gentlemen, I will once again set about to explain and interpret another gospel passage this time found in the Gospel of John chapter 2 vv. 1-11 and do so with hesitation and humility and I am honored to have the great privilege of even attempting to grasp and comprehend the words and mind of the son of god the savior of the world and redeemer of all mankind and all generations present to come and in the past. The words of the gospel passage from the gospel of John as follows: On the third day there was a wedding at Cana in Galilee and the mother of Jesus was there. Jesus also was invited to the wedding with his disciples When the wine ran out the mother of Jesus said to him, “They have no wine.” And Jesus said to her “Woman what does this have to do with me? My hour has not yet come.” His mother said to the servants “Do whatever he tells you.”

Now there were six stone water jars there for the Jewish rites of purification, each holding twenty or thirty gallons. Jesus said to the servants, “Fill up the jars with water.” And they filled them up to the brim. “Now draw some out and take it to the master of the feast.” So they took it. When the master of the feast tasted the water now became wine and didn’t know where it came from, the servants who had drawn the water knew the master of the feast called the bridegroom and said to him “Everyone serves the good wine first and when people have drunk freely then the poor wine. But you have kept the good wine until now.” This the first of his signs Jesus did at Cana in Galilee and manifested his glory. And his disciples believed in him.

This gospel passage has many puzzling aspects to it. On the face of it, the passage relates a miracle of Jesus once again evidencing his divinity and proving his claim to be god as a worker of miracles that only god can do. How do we understand Jesus’s reply to his mother who when she tells him the wine has run out Jesus says what does this have to do with him since his hour has not yet come referring to his death on the cross and his resurrection. And what do we make of the sign in the miraculous event and the manifestation of his glory? The interpretation might be the working of the miracle is a signed proof of his claim to be god and his divine claim and shows his divine glory.

Cana was in Galilee and it was there his ministry of miracles began, not in Judaea. The miracle and what gives rise to it is the remark if not request they have no wine. Jesus’s replies to his mother means that no one can dictate to him, neither family nor friends and he acts only at the moment of his death and rising and the moment when then his glory is manifested. The Jewish rites of purification are not specified. John may mean the water drawn into the jars turned into wine or being drawn turned into wine. Either interpretation is possible. The event is described as a sign which John uses to refer to Jesus miracles. The word describes an act of Jesus which reveals he whole meaning of his life and ministry and looks to his death and resurrection. This miracle represents the gospel whereby men and women are brought to the faith. The story is a paradigm to guide us to the Passover of Jesus in his last hours where we are told the bread and wine represent his body and blood which in the communion event represent the miracle Christians partake of in the communion meal and celebration. The entire miracle and event are a sign and revelation of Jesus’s glory which the story tells us lead his disciples to believe in him. The imagery of the wine can be taken to represent both the messianic wedding feast and Jesus words in the Passover that the bread and wine are now him in this new religion he is founding and establishing. Finally, the miracle manifests Jesus’s glory and not even his mother or any human agency can cause Jesus to deviate from his mission. Perhaps this is how we can understand Jesus’s response to his mother. Finally, I am not sure about the good wine by the master except to connect is with the miracle and sign.

My friends of all faiths and thoughts and opinions I hope you will find some benefit in this essay however inadequate and limited my effort and interpretation, and I urge you to return to the biblical text and read and reread to attain a full understanding of the words and thought of Christ the incarnate god and savior.