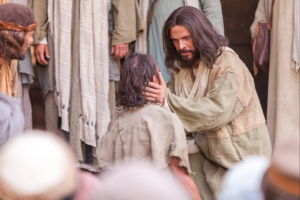 Ladies and gentlemen, I here once again to set about and explain and interpret another gospel passage and the previous and deep words of Jesus, this time found in the gospel chapter 9 v. 14-29. I do so with hesitation and humility and I am truly honored that I have been given the great privilege of even speaking of and attempting to grasp and comprehend the words and the mind of the son of god the savior of the world and the redeemer of all mankind and all generations present, past and to come.

The words of this passage from the gospel are as follows: And when they came to the disciples, they saw a great crowd about them and scribes arguing with them. And immediately all the crowd when they saw him were greatly amazed and ran up to him and greeted him. And he asked them, “What are you discussing with them?” And one of the crowd answered him “Teacher I brought my son to you for he has a dumb spirit and wherever it seizes him it dashes him down; and he foams and gnashes his teeth and becomes rigid and I asked your disciples to cast it out and they were not able. And he answered them “O faithless generation, How long am I to be with you? How long am I to bear with you? Bring him to me.” And they brought the boy to him and when the spirit saw him immediately it convulsed the boy and he fell to the ground and rolled about foaming at the mouth. And Jesus asked the father “How long has he had this?” And he said, “from childhood… and it has often cast him into the fire and into the water to destroy him but if you can do anything have pity on us and help us.” And Jesus said to him “If you can! All things are possible to him who believes.” Immediately the father of the child cried out and said “I believe it will help my unbelief. And when Jesus saw that a great crowd came running together, he rebuked the unclean spirit saying to it “You dumb and deadly spirit I command you come out or him and never enter him again!” And after crying out and convulsing terribly it came out and the boy was like a corpse so that many of them said he is dead. But Jesus took him by the hand and lifted him up and he arose. And when he had entered the house his disciples asked “why could we not cast him out?” And he said to them “this kind cannot be driven out by anything but prayer.”

This is a healing story long and detailed and there is a great deal of mention of a great crowd following and attending Jesus and his disciples again evidence of the attention Jesus was attracting. The father and the boy are the central characters, and more than once there is the mention of the disciples’ inability to heal the boy and a significant element of the account is the dialog between the father and Jesus. The father’s faith is extremely important as an element of this narrative, and the father cries out with a profession of faith. The disciples’ inability to do this healing is explained that only the power of god as it resides and can only be found in Christ can heal. We are told the disciples are arguing with the scribes amid a crowd forming and the scene is set for Jesus powerful action that as god and divine can be done by him alone and is something the disciples cannot accomplish a healing and miracle possible with god alone in the person of jesus. The description of what happened when the boy is taken over by the seizure is described with the action of the boy falling to the ground and foaming at the mouth and the father tells Jesus the boy is cast into fire and water and asks Jesus to help the boy. This seizure is usually explained as an epileptic seizure. The use of the words faithless generation refers to the lack of response to Jesus teaching and activity and sets him against all. The story assumes not a medical problem but demonic possession and on seeing Jesus, the spirit convulses the boy similar to the description given by the father to Jesus. The passage states that faith is integral to this healing event. Verse 24, in which the father states he believes but asks Jesus to help his unbelief, affirms the father’s faith in Jesus’s healing power yet faith is still mixed with doubts but as the story unfolds it is clear that the father’s protestation of faith is sufficient for the healing to occur. Verse 25 refers to the spirit as speechless and deaf whereas before this it is described as unclean and in verse 17 of this chapter it is described as speechless. The state of repose of the boy led the crowd to assume he was dead, and this leads to the resurrection terminology of the next verse. And in fact the boy is raised up in the fashion and is a preview of Jesus’s resurrection. The disciples do ask why they could not effect this miracle of healing and Jesus answer suggests that to do this involves a greater reliance on god’s power in prayer.

I conclude with a number of points to be emphasized and recalled. This miracle was performed and made possible on through Jesus alone and by and through faith belief in his divinity and divine power. He has once again made claim to be god and have the power of god given to him to heal and do this miracle here but faith on the part of the father is integral. The miracle not only involves the healing but what could be described as the boy’s resurrection from his death like appearance and trance a preview of Jesus own resurrection and the power of his divinity. The following of Jesus as always is large and extensive, and his followers of this new religion were many and numerous. The miracle and healing involve the casting out of a demon or at least that seems to be the proper interpretation otherwise the matter would be confined in its meaning to the cure alone and no more.

My friends, do feel free to read this essay again if you find it beneficial. I urge you to go back to the biblical text where the words and life and events of Jesus the rescuer and savior of humanity can be read and reread and reviewed time and time again whose riches cannot be exhausted.