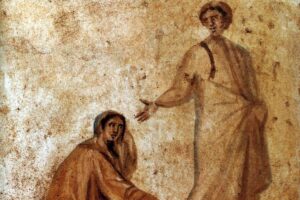 Today I will once again set about to explain and interpret another gospel passage and always the most telling words and thoughts of Jesus, the eternal son of god and the savior and redeemer of the world. This passage is taken from the gospel of Mark is found in chapter 5 verses 21-34 and I approach this task with great humility and hesitation and I am honored and have the greatest privilege to even speak of and attempt to grasp and comprehend the words and the mind of the son and word of god made flesh the rescuer of all humanity and of all generations past, present and to come.

The chapter from the gospel of Mark and the verses Mark chapter 5 vv. 21-34 is as follows: And when Jesus had crossed again to the boat on the other side, a great crowd gathered about him and he was beside the sea. Then came one of the rulers of the synagogue Jairus by name and seeing him he fell at his feet and besought him saying “My little daughter is at the point of death. Come and lay your hands on her so that she may be made well and live and he went with him.” And a great crowd followed him and thronged about him. And there was a woman who had a flow of blood for twelve years and who had suffered much under many physicians and had spent all that she had and was no better but rather grew worse. She had heard of the reports about Jesus and came behind him in the crowd and touched his garment. For she said “if l touch even his garment I shall be made well.” And immediately the hemorrhage ceased, and she felt in her body that she was healed of her disease. And Jesus, perceiving in himself that power had gone out from him, immediately turned about in the crowd and said “Who touched my garment and his disciples said to him? You see the crowd pressing around you and yet you say who touched me?” And he looked around to see who had done it. But the woman knowing what had been done to her came in fear and trembling and fell down before him and told him the whole truth. And he said to her “Daughter your faith has made you well; go in peace and be healed of our disease.”

This miracle healing and event in the life and ministry of Jesus has many points of interpretation and presents to all of us a number of points of thought and ideas for all of us to grasp and comprehend. The essential message is one of faith. We are at the outset told of the ruler of the synagogue and his faith which is to great that he recognizes Jesus’s divine power and his divinity telling Jesus that his daughter is at the point of death and to come and lay his hands on her so that she may be made well. The ruler of the synagogue recognizes that Jesus is god or at least has divine power.

The point here is the faith of the ruler and we are told he is the beginning point of the new mission church Jesus is founding. And then there is the same faith of the woman with the flow of blood who hearing of this divine healer has such and great and overwhelming faith and her faith is so great in this divine healer that she believes that merely touching Jesus’s garment will make her well. Touching Jesus’s garment has cured her of her disease The divine power in Jesus and his divinity is so great that even touching his garment is enough to cure without even touching his person. Again we have a new member of this growing mission church and we have growing evidence of Jesus’s claim to be god and his divinity. It is important to note here that crowds are following Jesus and there are reports of his miracles and work among the people which contributed to his death on the cross and his great suffering. The woman’s faith is so great in Jesus as god and divine and his divine power that she falls down before him and tells Jesus what has happened and he tells her that her faith has made her well and healed her of her disease. Again, this passage is concerned with faith and leads and brings us to Jesus’s divine claim as evidenced and what happened here initially with the ruler Jairus and the woman were faith in the divine claim of Christ and with this claim comes the growing mission church which is attracting great crowds and followers and reports of Jesus and his work. The woman believed that at least contact with Jesus was contact with a powerful person who could heal her. She only touches the garment perhaps because she is ritually unclean and will not touch his person lest that person be made unclean. She believes that the powerful Jesus has the power to heal her and the cure is immediate. Jesus’s divine power is so great that he need not even place his hands on her and has spoken no word. His divine power is in full control of the situation and of the power he bears. Finally, the women’s fear may have been connected perhaps involving Jesus in ritual uncleanness but more likely is fear and shock at the miracle that had been worked upon her.

Dear Friends believers in Christ or not, I sincerely hope and trust that I have shed once again some light on the words and mind of Jesus. Do, if you wish, read this essay again and again if time permits, and more important ,go back to the biblical text in Mark and read and reread and reflect on this most profound and significant event in the life of Christ and his words which and cannot and will not fail to inform and inspire and raise us to a level and levels of mind and spirit and sol we may not have thought possible.