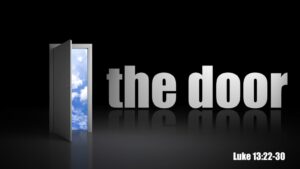 Today I will be attempting to analyze and understand one of Jesus’s most profound series of thoughts and sayings found in the gospel of Luke chapter 13 vv. 22-30 and I take it as a privilege and honor to be given this great opportunity to share my thoughts and perceptions and insights on the words and thoughts of the eternal god as he speaks to us in his holy word and instructs us from the mansions and precincts of heaven in the company of the persons of the holy trinity and all the angels and archangels and saints past present and to come. The passage is as follows: He went on his way through towns and villages teaching and journeying toward Jerusalem. And someone said to him “Lord will those who are saved be few?” And he said to them “Strive to enter by the narrow door for many I tell you will seek to enter and will not be able. When once the householder has risen up and shut the door you will begin to stand outside and to knock at the door saying ‘Lord open for us He will answer you I do not know where you come from’ then you will begin to say ‘We ate and drank in your presence and you taught in our streets. But he will say ‘I tell you I do not know where you come from depart from me you workers of iniquity. There you will weep and gnash your teeth when you see Abraham and Isaac and Jacob and all the prophets in the kingdom of god and you yourselves thrust out. And men will come from east and west and from north and south and sit at the table in the kingdom of god. And behold some are last who will be first and some are first who will be last.’”

My dear friends and Christians and non-Christians alike and you of all paths faith, this passage presents many puzzling and challenging points and statements by Jesus as he speaks of the end of the age and the end times. In response to the question by one of the disciples that will those who will be saved be few he seems to indicate that to be so. He says that the door is narrow to gain entrance into the kingdom of heaven or, rather, the way to be saved and attain salvation is difficult and that many who wish to enter the presence of Christ and the kingdom of god will not be able, lacking either genuine faith or actual good works in their lives. He adds, in the use of an analogy, once god and Christ likened to the house holder has risen and shut the door and you may in fact seek to gain the entrance into heaven which your life and faith have not entitled you to, he will answer I do not know where you come from and depart from me you workers of iniquity and there you will suffer and weep and gnash your teeth when you see the prophets and the patriarchs Abraham and Isaac and Jacob and you yourselves thrust out and many will come from all places in the world, east west and north and south, and sit at the table of the kingdom and the last will be first and the first last.

Jesus, I think, is saying a number of things here and cautioning us that he will make a Xray-like judgment on all and will see through those who lack genuine faith and works of mercy and love and charity and there may be those who will say and claim they ate and drank with Jesus and he taught them in the streets. He makes clear he sees to the truth of the real person and with that true judgment on the person will come suffering and condemnation and those essentially wicked and wanting men and women having been seen through and so judged by who they really are will be thrust out seeing the patriarchs and prophets and he ends with the picture of many coming from all directions to sit at the table of the kingdom of god and says most significantly that this judgment will be infallible and true. He will in his judgment see through all falsity and hypocrisy and he will know genuine faith and a life of good works and faith. This passage relates to the condemnation of Israel and the calling of outcasts into the kingdom of heaven. God’s people are gathered from all corners of the world to share in the messianic banquet and perhaps the Jewish leaders and hierarchy excluded. Jesus locks the door to heaven for those who claimed a casual relationship with him and his message. One must share his life which is symbolized by table fellowship with the underclass and lowly. The image is the heavenly banquet and those who do not wish to commit themselves to Jesus’s way find themselves outside and in an act of god’s grace. He opens the heavenly banquet and heaven itself to all peoples. Once again, in opening heaven to all nations and peoples, Jesus is offering a new universal religious system beyond the Jewish nationalism of his day. He moves the Jewish religious system to a universal faith for all peoples and nations.

I do hope ladies and gentlemen I have offered in in the interpretation of this passage of Luke some assistance and enlightenment to my readers and urge you all most important of all to go back to the biblical text of the words of Jesus in Luke where you may come to know the mind soul of the eternal god savior and redeemer of the world and the king of all creation.