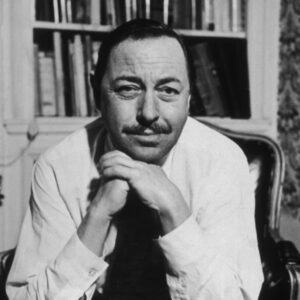 “A Biographical Sketch of one our Greatest Playwrights and Writers, One for all Ages and Generations, Tennessee Williams,” by Andrew J. Schatkin

My dear friends and thinkers and fellow literati and lovers of great and enduring literature and you of all opinions and thoughts and ideas I ask you to join with me in a voyage of intellectual discovery where those who may wish to engage in critical thinking and do not engage and accept media lies falsehoods and political code words, and join with me in this effort to gain truth and facts and find with me what is authentic in a confused world, and come with me to tear apart the forces and the curtain of darkness that may and does hide from us what are truth and facts.

I now propose and undertake to analyze and speak of the life and work of one of the great American playwrights and dramatists, Tennessee Williams, one for all times and ages of men. I have before analyzed and spoken of the lives and work of many outstanding English and American writers poets and novelists such as the poets Keats, Shelley, Milton, Byron; and such prose writers and novelists as Dickens, Thackeray, Conrad, Jane Austen and many, many others.

Today I speak of the life and literary work of the great dramatists Tennessee Williams. He was born in 1911 and died in 1983 and is with Eugene O’Neill among the most foremost playwrights of the 20th century. He became famous in 1944 with his play the Glass Menagerie and this was followed by a string of successful plays including A Street car Named Desire in 1947, Cat on a Hot Tin Roof in 1955, Sweet Bird of Youth in 1959, and Night of the Iguana 1961. He wrote poetry, short stories, and essays and a volume of memoirs. He was born in Columbus, Mississippi. As a child, Williams almost died of diphtheria that left him confined to the house for a year. The family moved many times and the father was promoted to a job in St. Louis, Missouri in an international shoe company. Williams attended the University of Missouri for two years from 1929 to 1931. Williams began writing and his father pulled him out of the school to work in the shoe company. He then attended Washington University in 1936 and transferred to the University of Iowa and graduated with a BA in English in 1938. In 1939, he moved to New Orleans and began to write for the WPA. In 1944 and 1945, The Glass Menagerie was an instant hit. His next play, A Street Car Named Desire, secured his reputation as a playwright in 1947. Between 1948 and 1959 he had seven of his plays produced on Broadway. Many of his plays were adapted for the screen. By 1959 he was awarded two Pulitzer prizes, a Tony award, and three New York drama critics circle awards.

Williams remained close to this sister who was diagnosed with schizophrenia. After attempts at relationships with women he engaged in a series of homosexual relationships. He died in 1983 in his suite in a hotel in New York. Williams was honored after his death for his literary work and achievements. Characters in his plays are often seen as representations of his family members. The Pulitzer prize for drama was awarded to him for his play A Street Car Named Desire in 1948 and Cat on a Hot Tin Roof in 1955.

I have always enjoyed the works of Tennessee Williams, in particular his outstanding plays such as The Glass Menagerie which is one of my favorites, A Streetcar Named Desire, Cat on a Hot Tin Roof, and Sweet Bird of Youth. They are all examples of the dramatic art and although I have not read and seen all of them, I have seen them on TV and the movies to gain a greater understanding of the depth of what he has to offer and as I grow older, I have a book of his plays always near me which I intend to read and read. I look forward to coming to know the works of this great artist who gave in his life so much to the world and I ask young people and all ages and generations to read his plays, see them in the theater, and see the movies and TV adaptations of his work.