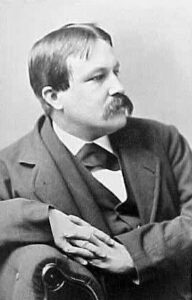 “A Biographical Sketch of one of our Greatest Men of Letters and Novelists, William Dean Howells,” by Andrew J. Schatkin

My dear colleagues, and you of all faiths and thoughts and all views and opinions, I bid you and ask you to join with me in another voyage of intellectual discovery where those who may wish to engage in critical thinking and do not engage in and accept media lies, falsehoods, political code words, and hype can join in the effort to gain truth and facts amid the barrage of corruption and virtual darkness we are confronted with and befuddled and made effective fools of. I welcome you in this quest and task of attaining and coming to know intellectual honesty and honest discernment. Join with me in this voyage of discovery to get at and find what is valid and authentic in the world of confusion and to come with me in tearing apart the curtain of lies and darkness that hides from us what is truth and facts.

Today I will write and speak of one of our greatest American writers and novelists, William Dean Howells and will speak of his life and literary works. William dean Howells was born in 1837 and died in 1920 and was an American novelist, poet and, literary critic and playwright and was named the dean of American letters. He was knowns as the editor of the Atlantic Monthly and for his great novels such as the Rise of Silas Lapham and others. He was born in Ohio and in 1840 the family moved to Hamilton, Ohio where his father over saw a Whig newspaper. He began to help his father with typesetting and printing in the newspaper. In 1856 he was elected as a clerk in the state house of representatives, and in 1858 he began to work in the Ohio State Journal, and he wrote poetry and short stories and translated pieces from French, Spanish. and German. In 1860 he wrote Abraham Lincoln’s campaign biography and gained a consulship in Venice and married Elinor in 1862 at the American embassy in Paris. He returned to America in 1865 and settled in Cambridge, Mass. He was made editor of the Atlantic Monthly in 1871 after five years as assistant editor. He wrote a series of articles in the 1870s for this journal and gave a series of lectures of lectures on the Italian poets for the Lowell Institute during its 1870-71 season. He published his first novel, Their Wedding Journey, in 1872 but had his first great literary success with his realist novel, A Modern Instance, where he described the gradual decay of a marriage followed by his 1885 novel, The Rise of Silas Lapham, describing the rise and fall of an American businessman. His social views were presented in the novel Annie Kilburn in 1888 and in a Hazard of New Fortunes in 1890. His poems were collected in 1873 and 1886 and a volume was published in 1895. He was of the school of American realists. In 1902 he wrote a book for children and that same year bought a summer home in Maine. His wife Elinor died in 1910 and he died in 1920. Howells also wrote contemporary literary criticism about current writers.

I have not had a full chance and opportunity to read all the novels of Howells but I have read his major novels and found them excellent examples of realism and have enjoyed their portrayal of American society of his day. His work in his social critique brings me to Sinclair Lewis in his novels Babbitt, Arrowsmith, and Main Street, which astutely and tellingly portray the American materialist society of his day. Howells does the same. In fact, Howells was a Christian socialist but was not a Marxist and was a follower of and influenced by Leo Tolstoy. I am myself a great admirer and follower of Tolstoy who rejected western materialism and chose to follow the primitive Christianity found in and expressed in the four gospels. Maxim Gorky said of Tolstoy when he died that the world stopped beat. I say the same and join Howells in his accurate critique of the materialism of the American society of his day which remains true in this day and age.