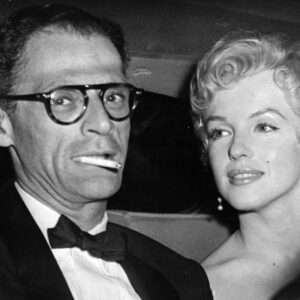 “A Biographical Sketch of Arthur Miller,” by Andrew J. Schatkin

My dear fellow thinkers and readers, and those of all thoughts and all views and opinions, I bid you and ask you to join with me in another voyage of intellectual discovery where those who may wish to engage in critical thinking and do not engage in and accept media lies, falsehoods, political code words, and hype can join in the effort to gain truth and facts amid the barrage of corruption and virtual darkness we are confronted with and befuddled and made effective fools of. I welcome you in this quest and task of attaining and coming to know intellectual honesty and honest discernment. Join with me in this voyage of discovery to get at and find what is valid and authentic in the world of confusion and to come with me in tearing apart the curtain of lies and darkness that hides from us what is truth and facts.

Today I will write and speak on and of one of our greatest of American writers and playwrights, Arthur Miller, and will speak of his life and literary works. In these pages I have spoken of with great pleasure of some of my favorite English and American prose writers, novelists, and poets who I love and treasure. I have written of the life and works of such poets as TS Eliot; Shelley; Keats; and Byron; and such novelists as EM Forster; Kipling; Dickens; Trollope; Thackeray; Austen; Conrad; Sinclair Lewis; Steinbeck; and many others. None of these greats of world literature and world thinking are never far from my thoughts and bedside and all are my daily companions and will never be far from me to very end and conclusion of my life.

My literary focus today is one the very great of American playwrights. Arthur Miller was born in 1915 and died in 2005 was a playwright and essayist in the American theater and his most popular plays are the Death of a Salesman; The Crucible; and a View from the Bridge; and he also wrote several screenplays and was often in the public eye from 1940 to l960 and was awarded the Pulitzer prize for drama, as well as other awards.

He was born in Harlem, NY and grew up in Brooklyn and the family moved there after the wall street crash of l929. After his graduation from the University of Michigan, he accepted faculty posts at New York University and the university of New Hampshire. He married in 1940 and in 1947 Miller’s play All My Sons was a success on Broadway and in 1948 in six weeks the hit play Death of a Salesman was completed and produced on Broadway in 1949 and the play was a commercial success. In 1955 Miller’s play View from the Bridge opened on Broadway. In 1956 Miller left his first wife and married film star Marilyn Monroe. Monroe converted to Judaism. Miller began working for the screenplay of The Misfits in 1960 and at that time their relationship began running into difficulties. In 1961 Monroe and Miller were divorced after five years of marriage and in 1962 Monroe died of a drug overdose. In 1962 Miller married Inge Morath, a photographer. Miller’s play The Crucible opened in 1953, based on the Salem witch trials and is Miller’s most frequently produced work in the world. In 1964 his play After the Fall was produced and is said to be a personal view of his experiences during his marriage to Marilyn Monroe. Miller also wrote the drama the price which was produced in 1968 and was Miller’s most successful play since his play Death of a Salesman. In 1968 he attended the democratic national convention as a delegate for Eugene McCarthy. And in 1978 he published a collection of his theater essays which included an introduction to his collected plays. In the 1990s, he wrote three new plays. He traveled to China to produce his play Death of a Salesman at the People’s Art Theater in Beijing. He received several awards between 1993 and 2001. Miller died in 2005 of cancer and heart failure.

Miller’s career as a writer spanned seven decades and at this death was considered to be one of the greatest dramatists of the 20th century. The Arthur Miller Foundation was founded to honor the legacy of Miller and his New York City public school education. The foundation celebrated Miller’s 100th birthday in 2015.

For me Arthur Miller is one of the greatest of playwrights and I have loved and enjoyed his plays including his great one, Death of a Salesman, literally a play in the form and even format of a Greek tragedy, tracing one human being’s tragic decline, and his equally great play The Crucible, based on the Salem witch trials, possibly showing a past portrayal of the House of Unamerican Activities investigations of the day. His other plays are also well worth reading and seeing, including All my Sons, A View from the Bridge, and After the Fall. Miller is, along with Tennessee Williams, one of the premier American writers of plays of this century. I will never forget him and his legacy and ask parents and children to come to know and understand the works of this great writer a writer for all ages and all generations.