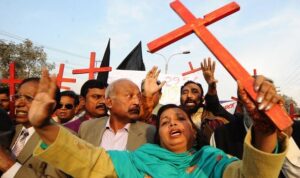 “More Thoughts on the Current Worldwide Persecution of Christians,” by Andrew J. Schatkin

Dear friends and neighbors and Christians and non-Christians alike, and all who hold varied opinions and ideas I ask you to join with me in love and concern for our Christian brothers and sisters who are victims of and suffer from persecution throughout the world. I add that many of these assaults and attacks on Christians are on the part of Islamic radicals and extremists and I must say and emphasize that most of our Muslim brothers and sisters are peaceful and law-abiding people seeking to live amicably with their neighbors and wanting to support their families and these acts of violence are actions on the part of a small cultural minority.

These persecutions with respect to Christians in the world seem to be most present in Pakistan, China, and Egypt, and are connected with Islamic radicals, a sliver of the population of those countries, and Nigerian Christians are particularly included in these events and acts of persecution. I will now detail the most current events of acts of persecution. Here are some examples of the most current acts of persecution. A Christian woman was killed on her way to work for failing to renounce her Christian faith. This year alone 2,200 Christians were killed in Nigeria by Islamic radicals. A 14 year old girl was forced into hiding with her family after her escape from a forced marriage and kidnapping. One thousand Christian girls yearly are converted to Islam by forced marriage. A 14 year old was found chained in her home who was married by force. A 14 year old was abducted on her way to school after being forced to marry her abductor and convert and escaped thereafter. In 2008, in India, a Hindu leader was murdered and Hindu extremists had 6,000 Christians’ houses burned. One hundred were killed and 18,000 were injured and their houses were burned and the women were widowed and the bodies of their husbands were dismembered and burned. And, finally, thirty percent of the forced marriage of underage girls were with girls under 11 and thirty percent involve girls 11 to 15.

Finally, I speak of a particularly egregious example of persecution in Pakistan. On the 13th of October 2020 Arzoo Raja went out to shop and never returned and was kidnapped and converted to Islam and forcibly married to her 44 year old abductor. The police did not cooperate with her parents because the two brothers of were in the police and the girl went to the lower court for justice. Despite a court order, the police failed to produce the girl and on October 27, 2020 the abductor went to the high court. The Judge favored the abductor because he was Muslim.

These are all examples of what is ongoing events of the constant and regular persecution of Christians and the church and all friends of whatever faiths and religious beliefs do join with me in protesting these genocidal acts of persecution. Go to your congressmen, your senator, and state assemblymen, and state senators, and dear students approach your professors and protest this religious persecution and do not simply walk over the burned bodies of these innocent Christian believers and forget them. Give them as much concern as black lives and the lives of the unborn and dying who some would devalue and kill in the name of euthanasia.

Let us not deny concern and love for these martyrs who have given their lives for the love of Jesus for all humanity. Are the only lives worth saving the lives of the politically favored and are those lacking political favor to be shunted aside and ignored? Is this the price of truth and the triumph of political correctness?