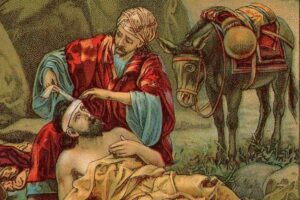 “Analysis of the Gospel of Luke, Chapter Ten, verses 25-37, The Parable of the Good Samaritan,” by Andrew J. Schatkin

Today I will seek and attempt to comprehend once again an event in the life of Jesus and come to truly know and grasp his message. I am honored and privileged in undertaking this task of explaining and interpreting the words of the son of god in holy scripture and approach this work with humility and hesitation knowing my inadequacy for this task and also knowing my serious mortal and human limitations in doing this work of analysis and interpretation and realizing that the mind and words of Christ are far beyond me in every real sense.

The bible verses I am seeking to shed light on and interpret is found in Gospel of Luke, chapter ten, verses 25-37, the Parable of the Good Samaritan. The passage is as follows: And behold a lawyer stood up to put him to the test saying, “Teacher what I shall do to inherit eternal life?” He said to him what is written in the law? How do you read? And he answered “You shall love the lord your god with all your heart and with all your soul and with all your strength and with all your mind and your neighbor as yourself. You have answered right; do this and you will live.”

But he desiring to justify himself said to Jesus “And who is my neighbor? Jesus replied “A man was going down from Jerusalem to Jericho and he fell among robbers who stripped him and beat him and departed leaving him half dead. Now by chance a priest was going down that road and when he saw him he passed by on the other side. Likewise a Levite when he came to this place and saw him passed by on the other side. But a Samaritan as he journeyed came to where he was and when he saw him, he had compassion and went to him and bound up his wounds pouring on oil and wine; then he set him on his own beasts and brought him to an inn and took care of him. And the next day he took out two denarii and gave them to the inn keeper saying ‘take care of him and whatever more you spend I will repay you when I come back.’ Which of these three do you think proved neighbor to the man who fell among robbers?” He said the one who showed mercy on him. And Jesus said to him “Go and do likewise.”

To fully understand this parable, we must perceive and grasp the various elements and strands of thought operative here. First the entire matter begins with the answer of Jesus as to how to gain and inherit eternal life is to love the lord god fully and completely and to love your neighbor fully as yourself. And then in an extremely perceptive answer as to who one’s neighbor is we are given the wonderful and amazing parable of the good Samaritan where Jesus points out the priest and Levite, the religious hierarchy of the day, pass the injured and beaten man but the Samaritan stops and helps the injured man. What we are told here is extremely significant. The one who proved himself the true neighbor was outside the mainstream if not pale of Palestinian Judaism and Jesus makes the distinct point that the true neighbor and who would inherit eternal life would know no racial or national origin or even any sort of ethnic boundaries. The one who fulfills the comment to love god and his neighbors is the non-Jewish Samaritan, the outcast of the community. Here we have the new religion begun by Jesus where any person of any race or religion can prove to love god and his neighbor by showing love for his neighbor in need. There are two points made here by Jesus: first, that the new universal religion Jesus has inaugurated has no limits of race or nationalism; and second, the love of one’s neighbor and god knows no racial or any other sorts of limits and in particular Jesus makes the point also that the person who truly loved his neighbor is not to be judged by his outward position or appearance of station in society, whether a Levite or priest, but rather is to be judged by his moral action of love demonstrated in this parable. The questioner here intended to prove his right to eternal life by defining the limits of his duty and showing how he had fulfilled it. The term ‘justify himself’ means to show himself righteous and acceptable to god. The priest represented the highest religious leadership among the Jews and the Levite was the lay associate of the priest but in contrast to the religious Jewish figures so named it was the outcast and foreigner who showed love and who was not expected to show sympathy to the Jews.

This story about showing mercy to those in need also states that non-Jews can not only obey the law but have eternal life or, better put, Jesus clearly is modifying the Jewish religion of the time to include all groups even non-Jews who obey the law of loving god and loving your neighbor. In this passage, Jesus inaugurates the new Christian mission. The law here is valid for Jews and non-Jews alike to gain and inherit eternal life. The answer to the question is not who belongs to god’s people but the proper conduct of god’s chosen people. The outcast Samaritan showed the love of neighbor and to be god’s people Jesus shows here a redefinition of Judaism and new understanding of the term to mean all those who obey the commands to love your neighbor Jew and non-Jew alike.

Dear friends, Christian and non-Christian alike, I do hope and trust I have in this interpretation of this very well-known and famous parable shed some light and thought on the meaning of Jesus words here and, most of all, I urge you to understand and recognize Jesus is making a new beginning and break from the Judaism and Jewish thought of his time to make universal what has for some time been a national religion. I urge you to return to the biblical text and passage in in Luke and to read and reread the words of and message of Jesus in this passage from Luke.