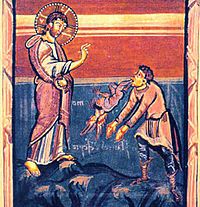 Today, I will once again have the honor of privilege of seeking to understand an event in the life of Jesus as set forth in the Gospel of Matthew, chapter 8, verses 28-34, which relates the casting out of the Gerasene Demoniac by Jesus. I do this and undertake this task with great hesitation and also humility knowing how limited is my human mind and human capacity to grasp and comprehend the words and the life events of the son of god as he instructs in his holy word and speaks to us from the mansions and precincts of heaven in the presence of all the saints angels and archangels and in communion with the holy trinity.

The gospel passage from the gospel of Matthew is as follows: “And when he came the other side to the country of the Gerasene two demoniacs met him coming out of the tombs so fierce that no one could come that way. And ‘behold’ they cried out. ‘What have to do with us O son of god? Have you come here to torment us before the time?’ Now a herd of many swine was feeding at some distance from them. And the demons begged him, ‘if you cast us out, send us away in a herd of swine.’ And he said to them ‘go’ so they came out and went into the swine and behold the whole herd rushed down the steep bank into the sea and perished in the waters. The herdsmen fled and going into the city they told everything and what had happened to the demoniacs. And, behold, the city came out to meet Jesus and when they saw him they begged him to leave the neighborhood.”

My dear friends what are we to make of this narrative? The first point that Jesus makes here and make clear is the reality of the power off evil and evil possession. There is no doubt as to the reality and even possession of evil whether seen in Hitler, Stalin of Pol Pot. There are evil forces in the world and these forces come into and work through human beings. There is no doubt as to the essential truth shown here by Jesus. Why they beg to be sent into swine is not clear, perhaps out of fear of what Jesus seeks to condemn with and the fashion of his condemnation. The swine rushed into the sea and perish under the dominance and possession of the demons that have taken them over. How are we to understand these events fully? As I said the issue of the reality of evil and how this reality in the form of demons can and does take over human beings. Jesus sees this reality and deals with it by casting out these demons or evil forces into a herd of swine who under the possession of these demons and evil forces literally in an act of suicide go into the sea and drown. I make two other points here: first is the reference by the demons to the end time and the final words that the city came out to meet Jesus and when they saw him begged him to leave the neighborhood. The main point here is that Jesus as a divine being and god has the power to expel demons and the herd stampedes over a cliff. The reference to the end of time is that the demons are free to trouble humanity until the end time. Finally, the reaction of the town to these events and their begging Jesus to leave does not mean rejection of Jesus and his message, but confusion and fear at these incidents and resentment at the destruction of a herd of animals valuable to them. The demons have made an admission that Jesus is the son of god; have power over the evil forces they represent; and are involved with and that the swine are as unclean as they are.

I do hope and trust have I had shed some light on this gospel passage that concerns itself with the reality of the evil forces that inhabit this world that can rule and take possession of any one of us and that in the end the son of god has ultimate power and control over and I ask you to not only read and reread what I have given you here but return again and again to the biblical text where we can attempt to understand another event in the life and ministry of Jesus and the truth of evil and the forces of evil and the power of the son of god over that evil.