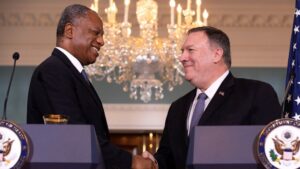 “Addendum to my Recent Blog on the Subject of the Current Worldwide Christian Persecutions,” by Andrew J. Schatkin

My dear colleagues friends and you of all faiths and sort of ideas and opinions, I recently posted an essay on the subject of the continuing persecutions of Christians in the world and I made clear I was not targeting any particular religious faith or group such as the adherents of the Islamic faith, most of whom are perfectly law-abiding and good people seeking to live their lives in peace with their neighbors and maintain and support their families and those who engage in these acts of violence are a small minority of that religion and culture.

I now wish to comment further on the continued persecution of Christians and note that I have equal concern for other persecuted groups in the world, such as the treatment of Muslims in China. For example, in Nigeria, Boko Haram and the Fulani are killing and murdering thousands of Christians and kidnapping and putting in slavery these same Christians. Those doing this are Islamic militants. Recently, the Fulani burned houses and stole crops of Nigerian families, again an act or Islamic militants. Also, Christians in Mozambique recently fled their homes in the face of an impending attack by the forces of radical Islam. Finally, Khmu families in Laos were forced to leave their villages if they continued to follow Christ and had to live in a shelter and forage for food. Finally, in Congo, thirty Christians were killed and five villages raided. The persecution continues unabated as do other acts of evil.

These are some episodes and concern for the continued world persecution of Christians. Mike Pompeo has added Nigeria to the Religious Freedom Blacklist. Nigeria is a country of particular concern in light of the continued murders of thousands of Christians in that country that the government is apparently unable to control. The world is full and aflame with persecution and murder, so I ask you all to protest these acts of violence and inform your children of these events and facts and ask them to approach their school system to address these atrocities and for you to approach your legislators to speak of and about these evil acts. You are all welcome to contact me by email on these and other issues I write about at a.schatkin48@gmail.com.