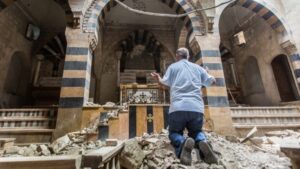 “A Few More Comments on the Worldwide Persecution of Christians,” by Andrew J. Schatkin

Today I will be speaking of events in the worldwide persecution of Christians, a topic and subject I have previously written on and reported on including the persecution of Christians in Egypt against the Coptic church; the murders of Nigerian Christians for some years; the closing of churches in Algeria; and blasphemy laws in Pakistan; as well as the prohibition of churches and bible in Saudi Arabia. I note that although many of these persecutions are from radical Islamic forces, most adherents of the faith of Islam are law abiding citizens seeking to support their families and live their lives in peace and these attacks are on the part of a small minority of radicals in the Islamic world.

Here are some examples of recent acts of persecution directed against the church and Christian believers. Some 30,000 Christians in Nigeria in the past few years have been attacked and murdered by forces of radical Islam. On May 16, two people were killed and others were displaced and the attackers burned the house of Christians. On May 18, a village was attacked in the Yoeb state and a hospital was burned down. On May 21, there was an attack again by radical Islamic forces on the Kaduna state. In India, Birga’s parents were killed in a bus accident and his relative rejected him because of his Christian faith to give help and the pastor gave help. In 2009, Islamic forces killed Monia Dra’s husband and slashed her neck requiring surgery. Again, the father of Carlos was killed in Colombia for preaching the gospel. Again in India. Jatya was ordered to sign a document promising to stop sharing the gospel and when he refused police broke all his fingers and he has been beaten by Hindu radicals, locked in a mail cell for a week, and whipped with a bicycle chain, but continues to share the gospel. While in her 20s, Aida of the former Soviet Union was imprisoned for four years. Her crime was receiving bibles smuggled into the USSR and sending out information about Christians imprisoned for their faith. Dura in Egypt was left in the care of her grandmother and when she began drawing pictures of a cross, her grandmother sent her to a mosque for treatment where she was abused by an Imam. At age 21, Dura’s mother arranged for her to marry a Muslim who abused her and later divorced her, refusing to let her see her son. The court ruled she had no parental rights because she was a Christian.

These are some examples of the continuing worldwide persecution of Christians., I ask you friends of all faiths, to join with me in protest of these acts of violence perpetrated against Christians and join in protest and concern for all forms of discrimination and persecution against any racial or religious group, and ask to not let these persecutions against Christians pass and do join with me in not allowing the world forces to pass by and ignore the sufferings of these martyrs for their faith as much as Black Lives Matter and the rights due to women be enforced. Do not have your concerns not only for the left politically-connected groups, but for all who suffer and die including these Christians whose only fault and crimes in our world was proclaiming he truth of Jesus and his gospel.