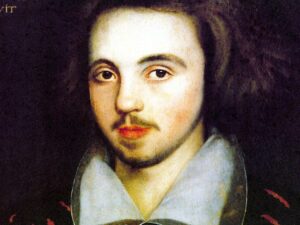 “A Biographical Sketch of one of the Greatest of the Dramatists and Poets of the English Renaissance, Christopher Marlowe,” by Andrew J. Schatkin

Ladies and gentlemen, today I propose to speak on and analyze of one of the greatest of our playwrights of the English renaissance and the contemporary of Shakespeare, Christopher Marlowe. And, so my dear friends, thinkers, and fellow lovers of literature, I bid and ask you to accompany me on this discussion of this very great poet and dramatist. Some of you may recall that I am a fan of the greats of English and American literature, poets and novelists and short story writers, and have considered the life and literary production of such English and American poets as Keats; Shelley; Wordsworth; Coleridge; AE Housman, and novelists such as Joseph Conrad; Jane Austen; Sir Walter Scott; Dickens; Thackeray; and Kipling, and many others. I treasure and love all these poets and novelists and they are and will never be far from my side and will always be an inspiration to and for me to the end of my life. Their beauty will ever be part of my soul and spirit.

Today I will seek to understand and comprehend one of the greatest or English playwrights, poets, and translators of the Elizabethan era, Christopher Marlowe. He was considered to have been the foremost dramatist in London in the years before his early death and many scholars believed he greatly influenced William Shakespeare. He achieved fame through his use of blank verse. He catered to the taste of his audience for physical violence and bloodshed and cruelty. He was born in 1564 and died in 1593, possibly in a barroom fight, although the cause of his death remains unknown. Marlowe attended by age 14 the Kings School in Canterbury on scholarship and two years later attended Corpus Christi College in Cambridge where he also studied on scholarship. Despite rumors that in France he intended to go to the English seminary at Rheims, he was awarded his degree in schedule.

Six dramas have been attributed to him either alone or in collaboration with other writers. Dido, Queen of Carthage is thought to be the first Marlowe play performed while Tamburlaine was his first play to be performed in a regular commercial basis and was the first English play to be written in blank verse. Others of his plays include The Jew of Malta; Doctor Faustus; Edward II; and The Massacre at Paris. The poetry attributed to him include The Passionate Shepherd to his Love and Hero and Leander. Marlowe’s plays were successful due in part to his lead actor Edward Alleyn. There are two modern scholarly editions of his collected works published by Oxford Press and Penguin. Dido, Queen of Carthage was published in 1594. The play was based on Vergil’s Aeneid books 1, 2, and 4. The play is thought to be the first play of Marlowe to be performed. The play Tamburlaine parts one and two was first published part in 1587 and part three in 1587-88. Part I concerns the conqueror Tamerlane as he rises from nomadic shepherd and bandit warlord and Emperor of Persia conquering the Persians, Turks, the Egyptians, and all of Africa in the process. Part II concerns Tamerlane as he raises his son to be conquerors. The first official record of the play The Jew of Malta was in 1592. Doctor Faustus was first published in 1601 and described how Faustus strikes a pact with lucifer and the play ends with Faustus being dragged to hell. The play Edward the II was first published in 1590 and the first recorded performance was in 1592. The play probes the life of the king and depicts the power politics of the time. The Massacre at Paris was first published in 1594 and depicts the events prior to and following the Saint Bartholomew’s Day Massacre in 1572 and reduces 17 years of religious war to twelve. Little ls known about Marlowe’s adult life and he has been described as a spy, brawler, and heretic. Much has been written about his adult life from 1587 to 1593, including his avowal to be an atheist, his same sex interests, and the questionable circumstances surrounding his death. He is alleged to have been a government spy and was awarded the MA degree by Cambridge despite rumors that he intended to go to the catholic college in Rheims to be a catholic priest. Marlowe was held in Newgate Prison after a quarrel with his neighbors and his arrest occurred in September and he was released on bail in October and was acquitted in December, all in 1589. In 1592 he was arrested in the Netherlands for his alleged involvement in counterfeiting coins, but no charge or imprisonment resulted. Marlowe was reputed to be an atheist and accused of Catholic sympathies. It has been claimed that Marlowe was a homosexual but the evidence in inconclusive, if not weak in the extreme. A warrant for Marlowe’s arrest was issued in May of 1593. On May 30, 1593, Marlowe was killed, possibly in a drunken fight and brawl. For his contemporaries in the literary world of his day, Marlowe was an admired and influential artist. It is thought Shakespeare was influenced by Marlowe.

I read and still remember studying in high school Marlowe’s Doctor Faustus. For me, Marlowe was a master of blank verse and a prominent leader of the English renaissance. Marlowe was and is best remembered by me as the poets of poets and his life reflects the essential lawlessness and violent and cruelty of his time. Whatever one may say of his life, he lived in a time of little laws and much violence and cruelty where the rule of law as it exists today was absent. Whatever the difficulties of life in his age and time, his very great poetry and the poetry of his plays remain intact and part of my heart and soul that in their stirring beauty will always be with me and part of me even to this day years from when I read and studied his literary work and the literary heritage he has bequeathed us will be part of the legacy of all future generations.