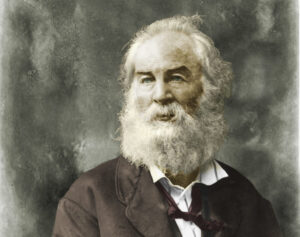 “A Bio Sketch of Walt Whitman,” by Andrew J. Schatkin

My dear fellow thinkers, I bid you and ask you to join with me in another voyage of intellectual discovery where those who may wish to engage in critical thinking and do not engage in and accept media lies, falsehoods, political code words, and hype can join in the effort to gain truth and facts amid the barrage of corruption and virtual darkness we are confronted with and befuddled and made effective fools of. I welcome you in this quest and task of attaining and coming to know intellectual honesty and honest discernment. Join with me in this voyage of discovery to get at and find what is valid and authentic in the world of confusion and to come with me in tearing apart the curtain of lies and darkness that hides from us what is truth and facts.

Today I will write and speak on one of our greatest of American poets and writers, Walt Whitman, and will speak of his life and literary works. In these pages, I have spoken of with great pleasure some of my favorite English and American prose writers, novelists and poets who I love and treasure. I have written of the life and works of such poets as Eliot, Shelley, Keats, and Byron, and such novelists as forester, Kipling, Dickens, Trollope, Thackeray, Austen, Conrad, Lewis, Steinbeck and many others. None of these greats of world literature and world thinking are far from my thoughts and bedside and all are my daily companions and will never be far from me to the very end and conclusion of my life.

Walt Whitman was born in 1819 and died in 1892 and was an American essayist, journalist, and poet. He is seen as the father of free verse and his work was controversial in its time particularly his poetry collection entitled “Leaves of Grass.” He was born in Huntington, Long Island and through much of his career resided in Brooklyn and at age11 left schooling and work to work and later worked as a journalist, teacher, and government clerk. Leaves of Grass was published in 1855, his major poetry collection. He tried to reach people with this American epic and continued to add to it and revise it to his death. During the American Civil War, he worked in hospitals in Washington, DC, tending to the wounded. Two of his best- known poems were written on the death of Abraham Lincoln.
Toward the end of his life, he moved to Camden, NJ where he died at age 72. He was born in Huntington, Long Island and at age 4 the family moved to Brooklyn. He lived in a series of homes. He concluded formal schooling at age 11. He worked as an office boy for two lawyers and for a weekly Long Island newspaper. He moved to New York City for work and for a time taught at various schools. In 1852 he wrote a serial novel and in 1850 he began writing Leaves of Grass and paid for the publication of the first edition. The next twelve poems he called Song of Myself. He left for Washington, DC, in 1862 thinking his brother George was one of the fallen or wounded and he found part time work in the army leaving time to volunteer as a nurse in the army hospital. In 1864, he obtained a post in the Bureau of Indian Affairs and in 1865 was fired from this post but was transferred to the attorney general’s office. He suffered a stroke in 1873 and moved from Washington to Camden where he published three versions of Leave of Grass and other works. In the years 1876, 1881, and 1889, he produced further editions of Leaves of Grass and in 1891 he produced a final edition of leaves of grass and died in 1892. His poetry exceeds the boundaries of poetic form and is often said to be the father of free verse. Whitman was a proponent of temperance and argued for prohibition and in his religious belief embraced all religions equally and was deeply influenced by deism. It is matter of dispute whether Whiteman’s sexual orientation was homosexual, though there are some biographers who say he was. Whitman was reported as sun bathing nude and was an adherent of the Shakespeare authorship question. Whitman opposed the extension of slavery and opposed abolitionism. Whitman is often described as America’s first national poet and is often described as the champion of democracy and equality. Whitman’s life and verse has been referenced in a number of works of film and video and his poetry has been set to music by a large number composers. Whitman is one of the most influential of American poets. Modernist Ezra Pound called Whitman ‘America’s Poet.’ To poet Langston Hughes, Whitman was a literary hero.

For me, Walt Whitman was and is one of the greatest if American poets. I read and reread Leaves of Grass, Song of Myself, and the two wonderful poems on the death of Abraham Lincoln, O Captain, My Captain and the poem When Lilacs Last in the Dooryard Bloomed.

I join with Walt Whitman in his lauding of our democratic system in his poetry and still enjoy greatly his free verse which grabs me in his experimentation of the poetic form. Ladies and gentlemen, I urge you, whether adults, parents of children of school age, high school, middle school, and college, go without hesitation to your local library and/or book store and buy or borrow the works of Walt Whitman and I am confident you will not regret doing so.