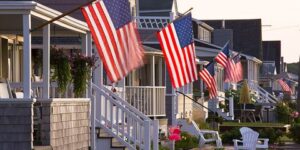 “A Critique of and Comments about American Culture,” by Andrew J. Schatkin

I would like to talk about our American culture and let me make clear t that I love this country and its culture and merely wish to make a few comments pro and con. The U.S.A. has been regarded as a Christian country and system of thought. There is some form of social equality and no overt class distinctions. The poor and the rich are treated the same. This may be a façade, but it is certainly better than a class ridden society and is closer to the gospel and the Christian message.

Second, American culture accepts all groups and races and religions. It is not critical and does not exclude and in accepting others shows no class distinctions. This stems from our system of political equality based on one man and one vote in forming our system and government.

On the other hand, I find certain aspects of American culture contrary to the gospel message. Our society is based on material wealth and making money. This is contrary to the Christian message, such as what is found in the parable of the rich man and Lazarus. Jesus’s states that the poor are blessed and discusses the difficulty for the rich man to gain salvation and get it into heaven.

Another aspect of American culture contrary to the gospel is the emphasis on celebrities and advertising. Jesus tells us to be humble and not to be self-important. The aspects of our society I have identified here have their origin in the capitalist system based on money and business. There are Christian values present in our society but there are many non-Christian concepts with the emphasis on money and material goods where we miss a great deal of other valid ideas. There will never be a Christian society because of human imperfection or, better put, sin. That imperfection will never be eliminated or eradicated except through transformation in and through Christ.

Finally, I want to speak of another aspect of American culture and society. We have a passion for equality and egalitarianism This stems from our system of political equality and has as an idea behind it of kindness and, if you will, love and charity. We pay a price with this emphasis in not recognizing merit and all forms of excellence in our system. Perhaps one might say this passion for equality flattens out and in some sense pulls all of us down to the lowest common denominator. This is the price of this idea of equality since the truth of the matter is we are all equal but our talents and abilities differ greatly and that talent and merits and excellence should be accorded the recognition it so richly deserves.

I address these issues here to point out certain philosophical failings in our system that require and demand correction. I hope I have provided some light and guidance on these issues and the pros and cons of our American culture and social system.