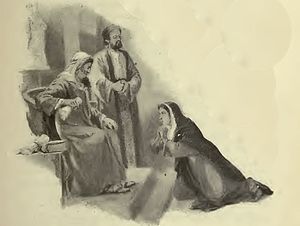 “Analysis of The Unjust Judge in the Gospel of Luke Chapter 18 Verses 1-8,” by Andrew J. Schatkin

I propose to interpret, explain, and seek to understand some sayings of Jesus Christ the Son of God and the savior and redeemer of the world and creator of the cosmos and the universe. I do so with humility and well aware of how awesome is the task I undertake in light of my limited humanity and my mortality. I welcome the honor and privilege of trying and attempting to understand the words of Jesus and I hope and trust I am up to the challenge of this work before me.

The gospel passage from the gospel of Luke is as follows and is taken from chapter l8 of that gospel, verses 1-8, commonly entitled The Parable of the Unjust Judge where Jesus says: In a certain city there was a judge who neither feared god nor regarded man; and there was a widow in that city who kept coming to him and saying ‘Vindicate me against my adversary.’ For awhile, he refused but afterward he said to himself, ‘Though I neither fear god nor regard man yet because this widow bothers me I will vindicate her.’ And the Lord said ‘Hear what the unrighteous judge says. And will not god vindicate the elect who cry to him day and night? Will he delay long over them? I tell you he will vindicate them speedily. Nevertheless when the son of man comes will he find faith on earth.’

There are many layers and strands of meaning in this parable. The essential root message in this series of sayings or parable is that god does hear and regard our prayers and if he does not seem to provide an immediate answer he advises here the persistence of prayer and that he will and does hear and respond to our prayers. The analogy perhaps somewhat puzzling is the widow’s persistent petitions to the judge who we are told neither feared god nor regarded man initially refused to hear the widow but the widow bothers the judge and he gives in to the cries of the It is quite clear from the words of the parable that the analogy is for us to persist in prayer. Yet the image of god seen as the unjust judge who neither fears god or regards man is quite difficult to follow and grasp. God is certainly not unjust and should not be seen as having not or lacking regard for men and god, yet this image is what we are given us where the persistence of the widow is compared to persistence in prayer to the eternal god. Finally, Jesus tells us here that he will vindicate the elect in the same way that cry to him day and night and will not delay long over them and will speedily vindicate them. Again, Jesus gives us a second meaning and thrust to this gospel passage where he says the persistent cries of the elect are heard and acted on speedily just as the persistent petitions of the widow were responded to. The prayer, so to speak, of the widow and the elect are in fact heard by god and responded to with love for the one person in prayer and for all the elect. The last phrase does not seem connected with the previous sentences where Jesus says there is the issue of when the son of man comes will he find faith on earth. Perhaps Jesus means will he find the faith of the widow and the elect or not. Jesus says here that god will not abandon them but they must pray and be faithful until the return of the son of man as he speaks of him in the last sentence of the parable. The church in prayer must be persistent and faithful. It is not continued prayer that is needed or advised but prayer with a relationship to god. The widow is an image of powerlessness in a male-dominated patriarchal society. The issue here is that if the persistent pleadings of the widow directed to the unjust judge is triumphant then how much more will the persistent prayers of the church and the believers and disciples be heard by god? God will vindicate the Christian community. The last sentence raises the issue whether the disciples and the church will remain faithful as they await the long period before his return.

I hope I once again shed some light and understanding of the meaning and import of the words of Christ, whose meaning can never be plumbed entirely or adequately and I urge you all to give some consideration to what I have said here and the interpretation I have offered and i do ask you to return to and read and reread the biblical text here and never cease to reflect on the words of Jesus that none of us can fully ever grasp and understand.