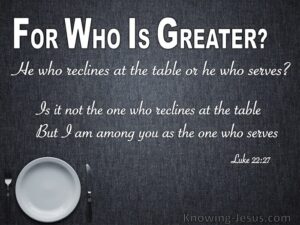 Ladies and gentlemen, I have the great honor of interpreting and attempting to understand, grasp, and comprehend another event in the life of Jesus and the words of the son of god. I do so with great humility and hesitation knowing my inadequacy and limitations as a weak and failed person and ask all readers of this essay that you know that no mortal person can fully penetrate and know and come to a full understanding of the words of the son of god and the savior of all mankind the creator of heaven and earth and the redeemer and remaker of the cosmos who wishes to bring all men and women and rescue them from their sinful condition to the joy and love of the holy trinity, and all the company of heaven, angels archangels and all the saints there and to come. The passage from Luke chapter 22 verses 24 to 27 is as follows: “A dispute also arose among them which of them was to be regarded as the greatest and he said to them ‘the Kings of the Gentiles exercise lordship over them and those in authority over them are called benefactors. But not so with you; rather let the greatest among you become as the youngest and the leader as one who serves. For which is the greater, one who sits at table or one who serves? Is it not the one who sits at the table. But I am among you as one who serves.’”

This passage has many levels of meaning and requires close and intense interpretation. First, we are presented with that great weakness of human nature presented by the group of Jesus’s disciples which is who was to be regarded as the greatest. This is a presentation of our failed human nature, the desire to be the greatest. We all share this very common human weakness, the desire to be seen by others as great and to think of ourselves as great. Jesus then answers that in the world system which he refers to as the kings of the gentiles exercise lordship and those in authority over them are called benefactors. He correctly tells us this is the world system, but it is a false system for the church and its disciples. He presents the new and reversed thinking of the coming kingdom and of god with the statement that the so- called greatest to be truly great must become as the youngest and the true leader is one who serves. He then presents the question that who is the leader, one who sits at the table or one who serves? The point here that one who sits and renders no help or service is lacking and doing little or nothing and that true greatness is founded in service, not vying or trying to be great, but he redefines what is and where true greatness is to be found and understood not as the kings of the gentiles and those in some sort of authority, in short, those who have worldly power, but in service that is where the true redefined greatness is to be found. Jesus ends with the most telling and important point telling the disciples that he god incarnate, who has come from heaven, has and does humble himself in service and so tells us that if god undertakes the role of a servant so much more we mortal men and women who seek wrongly and incorrectly in the world and among ourselves for so called greatness should like Jesus become servants of all, not seeking power and authority over our neighbors, but as Jesus commands loving them as ourselves.

Dear Friends and neighbors Christians and non-Christians alike, I do hope and trust that you have derived some benefit and insight from this little literary excursus and, most important, whatever I have said here cannot replace the reading of his gospel passage as Jesus enters in his words into our minds and spirits and souls making us the new men and women in his image he wishes and would have us become and be a new creation, something new and utterly wonderful, a being a little lower than the angels.