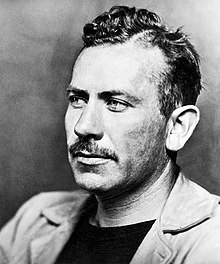 “A Biographical Sketch of One of the Greatest of American Writers, John Steinbeck,” by Andrew J. Schatkin

My dear friends, I bid you and ask you to join with me in another voyage of intellectual discovery where those who may wish to engage in critical thinking and do not engage in and accept media lies, falsehoods, political code words, and hype can join in the effort to gain truth and facts amid the barrage of corruption and virtual darkness we are confronted with and befuddled and made effective fools of. I welcome you in this quest and task of attaining and coming to know intellectual honesty and honest discernment. Join with me in this voyage of discovery to get at and find what is valid and authentic in the world of confusion and to come with me in tearing apart he curtain of lies and darkness that hides from us what is truth and facts.

Now I will present the life and literary work of John Steinbeck whose concern for the poor and the working class I share and admire. John Steinbeck was born in in 1902 and died in 1968 and was an American author and was the Noble Prize winner in 1962. He has great social concern in his writings and has been called a giant of American letters and his works are considered classics. In his life, he authored 33 books and six nonfiction books and two collections of short stories. He is known for his novels such as East of Eden, Tortilla Flat, Cannery Row, Of Mice and Men, The Red Pony, and the winner of the Pulitzer Prize, The Grapes of Wrath. Most of his work is set in California and he frequently examines theme of injustice and the downtrodden.

He was born in Salinas, California in 1902 graduated from Salinas High School in 1919 and went on to study English literature in Stanford University and left without a degree. In 1925, he travelled to New York City and returned to California in 1928 and married in 1930 in Los Angeles. During the depression, he bought a small boat and in 1930 met a marine biologist Ed Ricketts. His first novel was published in 1929 and between he produced three shorter works, The Pasture of Heaven, The Cup of Gold, and in 1935, Tortilla Flat. His later work included In Dubious Battle, Of Mice and Men, and The Grapes of Wrath. Of Mice and Men was about he dreams of two migrant laborers in California which was made into a Hollywood film in 1939. He also wrote two stage plays, including The Moon of Down and Burning Bright. In 1939, he published his first great literary success in The Grapes of Wrath concerning the hard lives of agricultural workers in the Great Depression in the dust bowl. It was a best seller and won the national book award. and won the Pulitzer Prize. In the 1930s and 1940s, Ed Rickett greatly influenced Steinbeck’s work. Steinbeck continued to write through the 40s to the 60s. The Moon is Down was published in 1942 and in 1943 he served as a war correspondent for the New York Herald Tribune. After the war in 1947, he wrote the The Pearl and in 1945 he wrote Cannery Row. In 1947, he made the first of many trips to the Soviet Union and in 1952 published his longest novel East of Eden. In 1960, he published a book entitled Travels with Charley, based on a trip he made across America with his poodle charley. His last novel, published in 1961, was the Winter of our Discontent. He won the Nobel Prize in 1962 and died in 1968 of heart failure. In 1964, President Johnson awarded Steinbeck the Presidential Medal of Freedom. His incomplete novel was based on the King Arthur. Legends of Malory was published in 1976. Many of his works are required reading in American high schools and in the U.K. Of Mice and Men is a key text. Steinbeck had contacts with left wing authors, journalists, and labor unions and joined the League of American writers, a communist organization, in 1935. Steinbeck’s major works include In Dubious Battle which tells the story of a fruit pickers strikes in California which is aided and damaged by the help of the Communist Party. Of Mice and Men is about two traveling ranch workers try to earn enough money to buy their own farm. The Grapes of Wrath is set in the Great Depression and describes a family of sharecroppers driven from their land due to the dust storms. It was made into a film with Henry Fonda. In the book East of Eden, Steinbeck deals with the nature of good and evil and follows two families, reprising the stories about the biblical Adam and his progeny. The book was published in 1952 and was made into a 1955 movie. In 1960, Steinbeck bought a pickup truck and drove across United States with his poodle Charley. In his book, Steinbeck describes what he sees from Maine to Montana.

John Steinbeck if one of my literary icons and idols for the reason that as a Christian I share deeply his concern for the working class the class that Jesus chose as his disciples and the sinners and underclass that followed him. Moreover, I share to at least on its face his attraction of socialism in the sense that at least on paper and in theory it is desirable to have equalization of wealth. Jesus wants all economic inequality eliminated as much possible. In a practical basis, socialism and communism do not work but on paper and in theory they suggest a more just and fairer society with wealth and opportunity, education, medical care, and employment made equal for all. Thus, I have an attraction to Steinbeck’s thinking and ideas, however proven impractical, and I have a great love and admiration for his very great novel on the theme I have just described. I also recommend three of his short novels which I have always enjoyed reading many times. Thus, my dear friends young and old do seek out the author in bookstores and libraries and I am confident you will derive great pleasure and enjoyment with reading this great writer and social criticism.