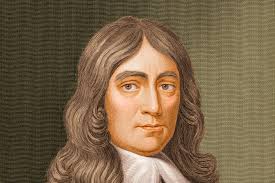 “A Biographical Sketch of John Milton, the Greatest of English Poets after Shakespeare,” by Andrew J. Schatkin

Ladies and gentlemen, I now propose and undertake to analyze and speak of the life and work of one of the greatest of English poets after Shakespeare and the author what many regard as the only English epic poet with the exception of Edmund Spenser, the author of the Faerie Queen, also seen by many as an epic poem, but perhaps is better defined as a species of epic poetry the romantic epic. Milton wrote an epic concerned with the fall of man into sin, an event Milton regarded for me rightly as the watershed in history. Milton wrote Paradise Lost and others of his greatest poems while blind which included Paradise Regained and his play was modeled on Greek Tragedy Samson Agonistes. That he wrote and composed these poems while blind suggests to me the great power of his mind and will.

For me to even speak of this giant is the greatest of privileges and honors. Milton was born in 1608 and died in 1674 and was not only a poet but served as a civil servant for the Commonwealth of England under Cromwell. He composed Paradise Lost in 1667 which is regarded as one of the greatest works of literature ever written and he also wrote in Latin, Greek and Italian. He also wrote the Areopagitica, written in condemnation of censorship and in defense of freedom of speech and freedom of the press. Milton was born in London and his father achieved financial success as a scrivener and his father was able to provide his son with a private tutor. In 1625, Milton began attending Christ College in Cambridge and graduated from Cambridge in 1629 and thereafter in 1632 he obtained his Master’s degree. He then undertook six years of private study in ancient and modern literature, philosophy, and theology and in this period of time produced two of his most notable lyric poems, Comus and Lycidas. In 1638, he undertook a tour of France and Italy. On returning to England, he wrote prose tracts in the service of the puritan and parliamentary cause. Supported by his father, he became a school master educating his nephews and the children of the wealthy. With the victory of parliament, he began to write in defense of the republican causes and was appointed Secretary for Tongues by the Council of State in 1649 and his position was to compose foreign correspondence in Latin. In 1652, Milton became totally blind. Upon the Restoration in1660, Milton went into hiding while a warrant issued for his arrest and his writings were burnt. After, a general pardon was issued, but he was nevertheless arrested and briefly imprisoned before friends intervened. He married for a third time in 1663 and spent the remainder of his life quietly. He died of consumption in 1674. Milton and his first wife Mary Powell had 4 children. In 1656, he married Katherine Woodcock but she died in 1658, four months after giving birth to her daughter. He married for a third time to Elizabeth Minshull.

Milton’s great work, Paradise Lost, was composed by the poet blind and impoverished between 1658 and 1664. The poem was dictated to aides in his employ and reflects his depression and despair at the failure of the revolution yet reflects optimism in human nature. In 1667, he sold the publication rights of Paradise Lost and thereafter produced its sequel Paradise Regained and the biblical-based tragedy Samson Agonistes.

Milton’s theology and philosophy were Protestant and Puritan, while his political views were republican and allied with Cromwell. He believed in free speech and toleration and sought to support divorce but abandoned his campaign for divorce after 1645. Once Paradise Lost was published, Milton’s stature as an epic poet was immediately recognized. Milton’s influence has been long lasting.

Milton as a poet is one of my all-time favorites. His short poems are of great structured beauty and their themes are most moving. These poems are and always will be embedded in my memory and include the very great short lyrics L’allegro; Il Penseroso; On the Morning of Christ’s Nativity; Lycidas; and Comus. These short poems are all very great works of art. Yet it is Paradise Lost that will always be part of me forever not only because it is a great epic poem but because as a Christian I fully agree with and know to be true that Milton knew the truth of it all that history and the ultimate event in history was mankind’s fall into sin and his redemption and restoration in Christ. These for Milton and for us all are the key events in the history of the world and the cosmos.

I take a final look at Samson Agonistes, a biblical tragedy based on the Greek tragic model. This play, like Paradise Lost and Paradise Regained all call me to the final truth found only in Christ and the biblical revelation. These are the foundations of my life as Milton so astutely recognized. Milton’s thoughts and perceptions will always move the world to the level he and I know to be true: the fall and redemption in the savior and redeemer of the world and the creation.