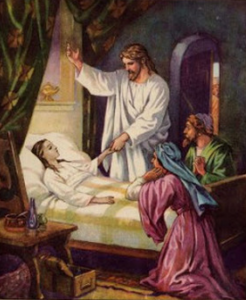 My dear Christians and you of all faiths and thoughts and all views and opinions, I bid you and ask you to join with me in another voyage of intellectual discovery where those who may wish to engage in critical thinking and do not engage in and accept media lies, falsehoods, political code words, and hype can join in the effort to gain truth and facts amid the barrage of corruption and virtual darkness we are confronted with and befuddled and made effective fools of. I welcome you in this quest and task of attaining and coming to know intellectual honesty and honest discernment. Join with me in this voyage of discovery to get at and find what is valid and authentic in the world of confusion and to come with me in tearing apart he curtain of lies and darkness that hides from us what is truth and facts.

I now seek to grasp and comprehend the story and narrative of the raising of Jairus’s daughter in Luke chapter 8:49-56. That passage is as follows: “While he was still speaking, a man from the ruler’s house came and said ‘your daughter is dead, do not trouble the teacher any more.’ But Jesus on hearing this answered him ‘do not fear only believe and she shall be well.’ And when he came to the house he permitted no one to enter with him except Peter, John, James, and the father and mother of the child. And all were weeping and bewailing her, but Jesus said ‘do not weep for she is not dead but sleeping,’ and they laughed at him knowing that she was dead. But, taking her by the hand, he called saying ‘Child, arise,’ and her spirit returned and she got up at once and he directed that something should be given her to eat. And her parents were amazed but he charged them to tell no one what had happened.

What are we to make of this narrative? I see two elements in the story. First, Jesus tells the family to believe and the daughter will be well. This is the beginning key that it is faith that will affect any sort of cure. Jesus enters the house where the girl is thought dead and tells the family, along with the father and mother of the child and Peter, John and James that the child is not dead bur sleeping and he takes the child by the hand and tells her to arise and the child’s spirit returns and she gets up and Jesus directs that she given something to eat and the parents were amazed and he charged them to tell no one what had happened. There are two ways to understand what happened here. One is that Jesus raises the child from the dead and that this event looks forward to the resurrection of Christ. That is one possibility. On the other hand, jess says the child is sleeping and perhaps means she is ill and appears to be sleeping. In sum, Jesus cures the child so ill as to appear in the throes of death. This is the second and more likely interpretation although it is quite clear that the story looks forward to the resurrection of Christ and to the resurrection of us all. This raising of Jairus’s daughter is a sign of resurrection power of Christ. Her taking food is a sign of the girl’s restoration to health and in some sense the story points to the miraculous cure of girl in a state of an illness, almost like death or looking like death.

Dear friends I do hope that this essay and interpretation of this section of the Gospel of Luke is helpful and beneficial and most important, however imperfect my interpretation and explanation of this passage. I do urge you all of all faiths to consult holy scripture and read and reread the words and this event in the life of Jesus and in his ministry where we all will learn in his words and actions who we are and who we can be in the course of our life as we come to know him and who he is.