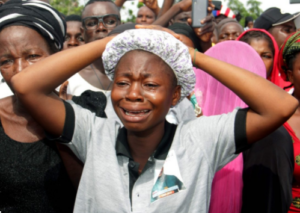 “A Few More Words on the Persecution of Christians,” by Andrew J. Schatkin

My dear Christians and non-Christians and you of all faiths, thoughts and all views and opinions, I do bid and ask you to join with me in another voyage of intellectual discovery where those who may engage in critical thinking and do not engage in and accept media lies falsehoods and political code words and hype can join in the effort to gain truth and facts amid the barrage off corruption and virtual darkness we are confronted with and befuddled and made effective fools. I welcome you in this quest and task of attaining and coming to know intellectual honesty and honesty discernment. Join with me in this voyage of intellectual discovery to get at what is valid and authentic in this world of confusion and do come with me in tearing apart the curtain of lies and darkness that hides from us what is truth and facts.

Today I will speak of the ongoing incidents of Christian persecution in Africa. Susan Ithungu, after her conversion to Christ, was locked in her bedroom for six months by her father who beat her. The police rescued her and when rescued could not walk or talk. Her hair had turned yellow; her fingernails were long and her eyes sunken and she was 45 pounds. Her pastor visited her in the hospital after her rescue and she received extensive medical care and surgery and is scheduled for a final surgery. Despite her suffering, she has not renounced her faith in Christ. This is but one example of the persecution of Christians and Christianity in this evil world where Satan at times gains control. Here is another instance of Christian persecution. Peter Jasek was imprisoned as a spy and enemy of the state because his provision of service to persecuted Christians broke Sudan’s laws. Two Christians were persecuted in Eritea. Helen Berhane was released from prison where she was placed for her Christian witness for three years and the other, Twen Theodoros, remains imprisoned there for the past 16 years. In Tajikistan, there was a similar persecution of a pastor. Tajikistan in 2009 passed a new religion law directing registration for all religious groups banned unregistered activity and placed strict control of religious materials. There a pastor who was the pastor of the good news grace protestant church. In Feb. 2017, officers of the state committee for religious affairs interrupted worship of a smaller church pastor by the pastor I named and proceeded to beat those in attendance, insulted, and swore at church members and demanded they renounce their faith. In April, those same agents raided the Good News Church and arrested Bakhrom and sentenced him to three years for his extremist views.

Here, dear friends, is another example of ongoing worldwide Christian persecution. In mid-February, Islamic church leaders murdered two church leaders in eastern Burkina Faso. On Feb. 10, 2020, extremists arrived at the house of a church leader and shot him to death in front of his wife. Three days after his murder the terrorists went to home of Pastor Omar and killed him and other members of his family. On Dec 1, 2019, gunmen killed 14 in a church service in Burkina Faso. In April 2019, several church members and a pastor were murdered by Islamic extremists who demanded they convert to Islam and when the church members refused they were murdered. More than 200 churches have been closed in Burkina Faso for fear of being attacked and ten thousand Christians have fled their homes as a result of this violence and more than 800,000 have been displaced by the violence. Finally, Imran Ghafur, a Christian has been imprisoned on a spurious blasphemy conviction for the past ten years and was sentenced to life imprisonment six months after his arrest in Pakistan.

Dear Christians and all brothers and sisters of all faiths and thoughts, I do again point out to our society the ongoing persecution of Christians on a regular and constant basis. I cannot understand the reason for these violent persecutions directed against Christian believers but can only account for these events that for these societies and systems the Christian faith which offers respect and freedom and concern and justice and love for the poorest of the poor Jesus and his gospel and his message are a threat to the power structure in those systems which wish to keep people in poverty and Jesus and the Christian faith and thought system raise a challenge to that thinking. Moreover, the exclusive claim of Christ is a severe challenge and threat that for many cannot be accepted and abided. Jesus predicted his followers would be persecuted. They were persecuted for 400 years after his death and are persecuted to this day. Many Christians have in the past been martyred and to this day they are martyred. These persecutions for the first 400 years after the death of Christ did not succeed and they will not succeed to this day.