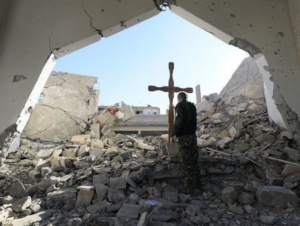 “A Few More Words and Thoughts on the Current Worldwide Persecution of Christians and the Christian faith,” by Andrew J. Schatkin

Today I will speak once again of the continued worldwide of the persecution of our Christian brothers and sisters throughout the world. I have previously addressed the persecution of Christians in china where pastors are jailed, churches torn down, and crosses demolished and churches spied on. I have also spoken of Christian persecution in Pakistan where blasphemy laws are enforced that can bring about jailing and even execution of Christians in that country. In Saudi Arabia churches cannot be built or bibles carried publicly. The Coptic church is persecuted in Egypt where Christians are murdered and monasteries demolished. Many Nigerian Christians have been murdered by the forces of Islamic radicals.

Let me give you more and current examples of current spread worldwide Christian persecution. In February, a Muslim prayer was recited in Washington, D.C., at a conference on extremism and counterterrorism. I make and have no prejudice against our dear Muslim brothers and sisters but cite this and other examples of an Anti-Christian bias. President Obama encouraged schools to teach students about the Koran. The states of Maryland, Michigan, and Arizona allow Muslim students time to pray during school hours. Again, I point out the bible cannot be taught or Christian students allowed to pray during school sessions. In 2007, President Obama said the U.S. was no longer a Christian country. In September of 2009, a Muslim prayer was recited in front of the White House and Capitol.

Let us look at the situation of Christians in China. China’s citizens are encouraged to spy on and collect data against Christians and cameras are installed in churches. Pastors are regularly imprisoned, including Pastor Cao for the last three years whose crimes of serving he poor in China and Burma. In China, images of Jesus are replaced with image of the Chinese leaders.

The situation in Nigeria continues to worsen where the husband of Julians was shot four times by Book Haram and asked him to renounce Christ. Finally, this persecution of Christians includes our Jewish brothers and sisters in Israel. President Trump just brokered a peace accord with the UAE and Israel. Following this, rockets were fired on Israel; the UN director spoke at a BDS meeting in Washington, D.C.; and the President of the Palestinian Authority said fighters would be sent to attack Jerusalem and the Israeli settlement dislodged.

Dear believers and non-believers, I once again point out to the world community the persecution of Christians and the Christian faith community and church worldwide and non-stop. I ask to no longer ignore the dead maimed bodies of the Christian community. Raise, young and old, your hands in protest and do not let these atrocities pass any longer. If black lives matter, then surely the lives of these Christians matter too and as much.