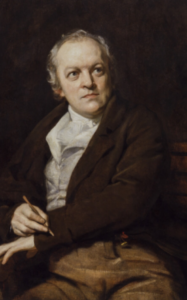 “A Biographical Sketch of One of the Most Notable and Greatest of English Poets, William Blake,” by Andrew J. Schatkin

My dear friends and fellow thinkers and you all faiths, views and opinions, I bid and ask you to join with me in another voyage of intellectual discovery where those who may wish to engage in critical thinking and do not choose to engage in and accept media falsehoods and lies and political code words and hype can join with me in the effort to gain truth and facts amid the barrage of corruption and virtual darkness we are confronted with and befuddled and made effective fools of. I welcome you in this quest and task of attaining and coming to know intellectual honesty and honest discernment. Join with me in this voyage of discovery to get at and find what is valid and authentic in this world of confusion and I ask you to come with me in tearing apart the curtain of lies and darkness that hides from us what is truth and facts.

I am as you may know a fan of the past great poets and prose writers of English literature and the English literary tradition and in these pages, I have written of many other great writers. Today I will speak and analyze the work and life of William Blake who for me and for many others is one of the greatest of English poets. He was born in 1757 and died in 1827 and was a poet; painter; and printmaker. He is now considered a seminal figure in the history of poetry and the visual arts of the romantic age. He is held in high regard by later critics for his creativity and expressiveness and he is seen as part of the romantic movement and was a committed Christian and was influenced by the French and American revolution in thinking. He was born in 1757 and attended school long enough to learn reading and writing, leaving at the age of ten and was otherwise educated at home. In 1772, he was apprenticed to an engraver and after seven years he became a professional engraver. In 1779, he became a student in the royal academy. Blake met Catherine in 1782 and that same year married her. His first collection of poems and poetic sketches appeared in 1783. In 1788, Blake experimented with relief etching but his commercial work largely consisted of engraving. From 1790 to 1800, Blake returned to London in North Lambeth. In 1800, Blake moved to cottage in Sussex and returned to London in 1804. Blake’s later years were spent at fountain court off the Strand and on the day of his death in 1827 he was working on his Dante series. Blake in his political views was concerned with the abuse of class power and his later poetry contains a private mythology.

Blake is best remembered for his illuminated books and greatest lyric poems which include Songs of Innocence, Songs of Experience, and such other books as the Marriage of Heaven and Hell; Visions of the Daughters of Albion; Milton; Jerusalem; and the already mentioned poetical sketches.

Let me end this essay on Wlliam Blake, now seen and regarded as one of England’s greatest lyric poets and engravers and relief etchers. He was an original spirit but for me although I recognize his wide creativity and his lyric poetry and most remember him for his short lyrics such as Tyger Tyger and the poem The Little Black Boy. His lyrics stick in my mind and I will never forget them. They are forever a part of me and my soul and mind; and, dear parents, obtain for your children an English verse collection where you may find these poems for the great future enjoyment of your children and grandchildren. Their beauty is immeasurable and unforgettable.