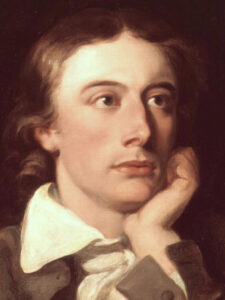 “A Biographical Sketch of one of the Greatest Poets in English Literature, John Keats,” by Andrew J. Schatkin

My dear friends fellow thinkers and fellow lovers of great literature and poetry, I bid and ask you to join with me in another adventure of intellectual discovery where those who may wish to engage in critical thinking and do not engage in and accept media lies, falsehoods and political code words and hype can join in the effort to gain truth and facts amid the barrage of corruption and virtual darkness we are confronted with and befuddled and made effective fools of. I welcome you in this quest and task of attaining and coming to know and grasp intellectual honesty and honest discernment. Join with me in this voyage of discovery to get at and find what is valid and authentic in this world of confusion and do come with me in tearing apart the curtain of darkness that hides from us what is truth and facts.

My dear lovers and followers of great literature of the past and present, I have a great love of English literature and have written on these pages biographical sketches of some of the leading lights of English literature including Alexander Pope; EM Forster; Chaucer; Joseph Conrad; Jane Austen; Charles Dickens; William Makepeace Thackeray; and John Stuart Mill and many others. These writers are my idols and I have come to know of their greatness that will conquer the ages and future generations never to be forgotten in spite of modern fads and fashions. They are and will always be for our children and grandchildren and we have a duty as parents and adults to bring our children to them and their work and presence.

Today I will present a brief sketch of one, in my estimation, of the English greatest lyric and romantic poets, John Keats, and I urge you dear friends not to have your children and grandchildren miss the privilege and opportunity of coming to know, read, and love this among the greatest of English poets.

John Keats was born in 1795 and died in 1821 and was one of the main figures of the romantic poets along with Lord Byron and Percy Bysshe Shelley. His poems were not well-received during his life but his reputation grew after his death and he became one of the most beloved of English poets. His most noted work is the poem Ode to a Nightengale and On First Looking into Chapman’s Homer, his most famous sonnet. He was born in London and his father first worked as a hostler at the stables attached to the swan and hoop inn. He was sent to board at John Clarke’s school in Enfield. Keats developed an interest in classics and history but when he was eight his father died from a skull fracture in a riding accident. Keats’s mother died of tuberculosis when he was 14 in 1810. Keats left the school to apprentice with a surgeon, Thomas Hammond. Keats registered as a medical student at a hospital and began studying there in 1815. Keats, however, devoted more time to literature. In 1816, Keats was introduced to the influential Leigh Hunt and five months later published a volume of his verses. The volume had bad reviews and Keats left the hospital. In 1818, Keats began a walking tour of Scotland, Ireland and the lake district. Keats moved to the newly built Wentworth Place and in April and May of 1818 he wrote five of his six great odes, including the Ode to a Nightingale; Ode to Psyche; Ode on a Grecian Urn; and Ode on Melancholy. In 1819, Keats wrote the Eve of St. Agnes; LaBelle Sans Merci; Hyperion; Lamia; and Otho the great. His poem Endymion received a bad review. In 1820 a final volume of his poetry was published including Lamia, Isabella, the Eve of St. Agnes and other poems which received favorable reviews. In 1817 and 1818, Keats became friends with Isabella Jones and Fanny Brawnein. 1820 Keats left for the warmer climate of Rome due to his tuberculosis. He died in Rome in 1821 at age 25 and had been writing poetry for about six years from 1814 to 1820. Sales in his lifetime amounted to only 200 copies and although he did write a great deal of poetry during his lifetime he is now one of the most admired of British poets mostly focused on the odes. Keats’s poetic work was sensory and luxuriant and his reputation grew steadily as the Victorian age came on Tennyson came to regard Keats to be the greatest poet of the 19th century. Keats was greatly admired after his death by such poets as Swinburne and Rossetti. Keats letters were first published in 1848 and 1878 and during the 20th century became as admired and studied as his poetry.

I now conclude this literary and biographical sketch of this great poet and I have to say that it was my mother, an English teacher and lover of English literature, who introduced me to the writers whose life and work I have sketched. Certainly it was Keats who my mother knew and introduced me to this great literary giant and I owe her a great debt of gratitude and for me with the privilege and honor of coming to know and read Keats’s sensuous poetry of great beauty. I can only say that once having read and read again Keats poetry and his odes in particular, this poet and his poetry changed my life and my spirit and emotions forever. To all my readers, if you have not read or heard Keats’s poetry, you have not lived fully and completely. His poetry is the epitome of the sensitive and none should miss this poet. I say again no one has lived who has not come to know and experience the poetry of Keats.