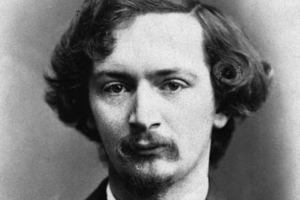 My dear friends fellow thinkers and readers and you who share with me my love of English literature, I bid you and ask you to join with me in another voyage of intellectual discovery where those who may engage in critical thinking and not to engage in and accept media lies and political code words and hype can join in the effort to gain truth and facts amid the barrage of corruption and virtual darkness we are confronted with and befuddled and made effective fools of. I welcome you in this quest and task of attaining and coming to know intellectual honesty and honest discernment. Join with me in this voyage of discovery to get at and find what is valid and authentic in this world of confusion and to come with me in tearing apart he curtain of lies and darkness that hides from us what is truth and facts.

Today, I will speak of and seek to present and understand one of the greatest of English poets, Algernon Charles Swinburne. He was born in 1837 and died in 1909 and was an English poet, playwright, novelist, and critic and wrote several novels and collections of poetry including poems and ballads. He touched upon a number of somewhat controversial topics such as lesbianism and sadomasochism and his poems have common motifs such as time and death. There are several historical people featured in his poems such as Sappho; Anactoria; Jesus; and Catullus.

Swinburne attended Eton college from 1849 to 1853 where he started writing poetry. He attended oxford in Balliol College from 1856 to 1860. He spent summer holidays in North Umberland and from 1857 to 1860 he became a member of Lady Trevelyan’s circle at Wallington Hall. He visited Menton on the French Riviera and travelled to Italy where he journeyed extensively. At Oxford, he met Dante Gabriel Rossetti and William Morris. Swinburne was an alcoholic and liked to be flogged and in 1879 he was taken at the age of 42 into the care of his friend Theodore Watts Dunton who looked after him for the rest of his life at the Pines at Putney. He died in 1899 at the age of 72. Swinburne presented his poetry as somewhat decadent and tried to convince his fellow citizens of his homosexuality and bestiality although there is a question whether he was any of these. He was a master in his poetry of rhyme and meter. He wrote poems with eight of ten rhymes, most difficult in English language and poetry. His work was once popular among undergraduates in Oxford and Cambridge. His poems and ballads and his Atalanta in Calydon have stood the test of critical esteem. Swinburne wrote essays on Shakespearean dramatists and the Johnsonian dramatists.
Swinburne’s most notable work includes poems and ballads; Atalanta in Calydon; Songs Before Sunrise; Tristram Lyonesse; and Poems and Ballads the first, second, and third series. Poems and ballads included Sappho of Lesbos; Anactoria; The Leper; Laus Veneris St. Dorothy; Hymn to Prosperine; The Triumph of Time; and Dolores. Swinburne developed a poetic form called ‘the rondel,’ taken from a variation of the French rondeau form. Swinburne was quite popular during his life and his later poetry became devoted to the cause of republicanism and revolutionary causes particularly in Songs of Sunrise but he did not stop writing love poetry.

I think it was my mother, an English teacher, who introduced me to Swinburne. I came early in my high school years to know and love Swinburne and it was his rhyming and versification that have never ceased to captivate me and fascinate me. He is for me the great master of rhyme and versification and his sense of rhythm and rhyme is so great that once you read his poetry you will be uplifted and raised up immeasurably and beyond belief. His rhyming and sense of rhythm is so masterful that when you read and hear his poetic diction and the sounds of his poetry you can almost loss the meaning of the verses. I have always loved his great poems. All these verses in their sounds and rhythm and rhyme literally capture and hypnotize us, bringing and raising us to new heights of sensitivity and sensibility.

Dear parents and you of all generations do not children parents, grandparents and uncles and aunts, do not miss out on the poetic experience of a lifetime, a poet never to be forgotten.