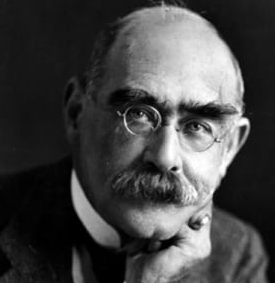 “A Bio Sketch of one of the Great Writers in the Canons of English Literature, Rudyard Kipling,” by Andrew J. Schatkin

My dear Christians and you of all faiths and thoughts and all views and opinions, I bid you and ask you to join with me in another voyage of intellectual discovery where those who may wish to engage in critical thinking and do not engage in and accept media lies, falsehoods, political code words, and hype can join in the effort to gain truth and facts amid the barrage of corruption and virtual darkness we are confronted with and befuddled and made effective fools of. I welcome you in this quest and task of attaining and coming to know intellectual honesty and honest discernment. Join with me in this voyage of discovery to get at and find what is valid and authentic in the world of confusion and to come with me in tearing apart he curtain of lies and darkness that hides from us what is truth and facts.

Today I will try to present the person and work of a much at one time admired and then maligned and perhaps misunderstood by some if not many, Rudyard Kipling. In these pages I have in past months done the same for the great if not outstanding prose writers and poets of English literature including Charles Dickens; John Keats; Lord Byron; Joseph Conrad; Jane Austen; and many others who I treasure as I do Rudyard Kipling, seen by some as a racist imperialist and by others, whatever his personal failings, as a great writer of short stories and poetry.

Kipling was born in 1865 and died in 1936 and was an English journalist, writer of short stories, and poet. He was born in India, which inspired much of his work, and his works of fiction included many short stories and several novels and was in the early 20th century one of England’s most popular writers and in 1907 was awarded the Nobel Prize in literature and was the first English writer to receive the prize. He declined a knighthood and the position of poet laureate. He was born in Bombay in 1865. At the age of five, he was taken to the United Kingdom and for the next six years lived with a couple who boarded children of British nationals. In 1878, Kipling was admitted to United Services College in Devon, a school founded to prepare boys for the army. The school provided the setting for his school boy stories, Stalky and Company. While there, he met and fell in love with Florence, who became the model for Maisie in his first novel published in 1891, “The Light that Failed.” He returned to India and Bombay in 1882 and obtained a position in Lahore where he was to be the assistant editor of a local newspaper, the Civil and Military Gazette. From 1883 to 1889, Kipling worked in British India for local newspapers such as the Civil and Military Gazette and the Pioneer. In 1886, he published his first volume of verse “Departmental Ditties” and began to contribute short stories to the gazette and 39 of his stories appeared in the gazette between 1886 and 1887. Most of them were included in the collection “Plain Tales from the Hills.”

In 1888, he published six collections of short stories. In 1889, he left India and travelled in the United States. He returned to London and met and married Caroline Balestier and they were married in 1892. They took a honeymoon to the U.S. and then to Japan. They rented a small cottage on a farm near Brattleboro, Vermont. There he wrote the two Jungle Books, and short stories, poetry, and a novel, “Captain Courageous.” In 1896, the couple’s second daughter, Elsie, was born. The Kiplings returned to England from the U.S. in 1896. Kipling was by then a famous man and continued to write short stories and poetry. In1898, Kipling travelled to South Africa. In 1897, Kipling moved to Sussex and Bateman’s house was his home from 1902 to his death in 1936.

At the beginning of the first world war, Kipling wrote pamphlets and poems supporting the U.K. war aims of restoring Belgium after it had been occupied by the German army. Kipling’s son John was killed in Sept. 1918 in the Battle of Loos. Despite his anti-communism, the first major translations of Kipling took place under the rule of Lenin in the 1920’s and Kipling was popular with Russian readers in the interwar years. Kipling wrote until the 1930s, though at a slower pace, and died in 1936 at age 70.

This I have to say of Kipling and his literary work… After you have read fifty or seventy of Kipling’s short stories, which I have, you will find that few have written better quality short stories. His children’s stories remain popular, such as The Jungle Books and Stalky, and they have been made into films as did Walt Disney with The Jungle Books. T.S. Eliot praised Kipling’s verse with an introductory essay in a book in which he edited, A Choice of Kipling’s Verse. The poet W.H. Auden celebrated Kipling’s verses. George Orwell stated that Kipling was a jingo imperialist and morally insensitive.

I have long enjoyed since my high school years and certainly in my college years Kipling’s short stories which are so carefully crafted that at times the story seems incomplete or even at times incomprehensible. The writer here seems to have tightened his prose product to its limits and his limits. His poetry for me is most engaging and pulls me along.

Whatever your position on his adherence to the imperialist system and perhaps a degree of racism in his thinking and writing, he was a product of his age and his times and his political views in that respect do not I think take away from his position as a writer of short stories, novels and poetry. His position in the literary canon remains high and that position cannot be removed or taken away by his politics.