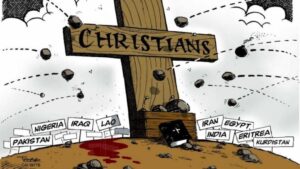 “Some Further Comments and Observations on Christian Persecution Worldwide,” by Andrew J. Schatkin

My dear friends, readers thinkers and Christians and non-Christians alike, I bid and ask you to join with me in another adventure of intellectual discovery where those who may wish to engage in critical thinking and do not engage in and accept media lies, falsehoods, and political code words and hype, and join in the effort to gain truth and facts amid the barrage of corruption and virtual darkness we are confronted with and befuddled and made effective fools of. I welcome you in this quest and task of attaining and coming to know and grasp intellectual honesty and honest discernment. Join with me in this voyage of discovery to get at and find what is valid and authentic in this world of confusion and do come with me in tearing apart the curtain of lies and darkness that hide from us what is truth and facts.

I have previously analyzed several times in these pages the constant and worldwide persecution of the church and of Christians throughout the world whether in China, Algeria, the Sudan, the Coptic church in Egypt, Pakistan, Saudi Arabia, and Indonesia. What is occurring worldwide is a what amounts to nothing more than a genocide of Christians on a worldwide basis for some many years. The mainstream media and our political parties essentially ignore this genocide and there are no protests, no outcry, and no discussion of the matter in the media or really on the part of our entire society. One can only speculate that there are serious political factors prompting this indifference, perhaps a disinclination to offend our Muslim brothers and sisters since in many instances Islamic fundamentalists are responsible for these murders and atrocities.

I now speak of more current incidents of the persecution of Christians. Earlier this year, 350 Nigerian Christians were killed by Islamic forces. By June, it is expected that 1,200 Christians will have been murdered and by the year’s end it is also expected that 2,400 innocent Christians will have been murdered. I ask why no protest; where are our college students and college professors on these murders; why is nothing said by our government, our political leaders, and the general public? Why does our society not only ignore these atrocities but almost hide what is happening in an attempt to keep people in darkness and ignorance? In sum, why no discussion and why no protest and why does our society walk blithely over the burned and murdered bodies of fellow Christians?

Let me give another example of Christian persecution, this time in Indonesia. In Indonesia, Fenna, a child, was burned over 85 percent of her body when a bomb ignited the gas tanks of cars and motorcycles parked in front of her church entrance on May 13, 2018. A minivan carrying bombs crashed into the gates of the church igniting the cars and motorcycles into flames where Fenna was in the vicinity. Fenna was three months in the hospital and endured dozens of procedures and surgeries and had therapy for several months and was transported to Malaysia for additional treatment. And so I ask why no concern for these dead Nigerian Christians who have suffered greatly and who no concern for Fenna, a little child almost burned to death by the forces of persecution? Yes, black lives matter; women matter in their decision to have their right to abort their babies; and the undocumented illegal immigrants matter. But why do Christian lives mean little or nothing? Why no outcry and why no rage and why no action or even concern? My friends and thinkers and Christians and non-Christians, please provide an answer.